The Celtic eSports League comprises of some of the best football gamers in the UK representing eight professional clubs from England, Wales, Scotland, Northern Ireland and the Republic of Ireland and Lee Davy sits down with the founder Geoff Wilson to get the lowdown.

Cristiano Ronaldo recently won the Ballon d’Or for the fourth time. The kids look up to him. They want to be him.

But for how long? 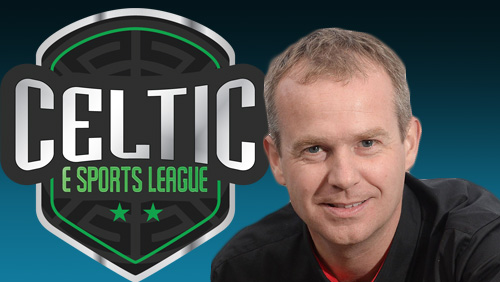 Technology is advancing at a rate of knots never before witnessed in our short tenure in this universe. How long will it be before the thought of sliding around in the mud on a wet Sunday morning in Cardiff will seem as ridiculous as watching movies using an old Betamax?

EA Sport’s FIFA franchise is the most popular sporting video game in the world. If you are a parent and are reading this, then there is a high probability that your children are playing it right now. It’s the last remaining way for father and son to bond now we no longer find it acceptable to take him on a hunt and smear his young face with the blood of a dying fox.

Geoff Wilson knows this, and that’s why he formed the Celtic eSports league where eSports athletes compete in eSports games on the Xbox representing one of eight professional clubs from around Britain and the Republic of Ireland.

“I have always worked in the sports industry, and when I saw the eSports numbers I saw tremendous potential,” said Wilson. “I got together with some of my friends, and we could see that one of the things missing from eSports was a set of traditional league fixtures like in the physical game of football.”

Wilson and his new team picked up the phone and started calling football clubs throughout Britain & the Republic of Ireland. The calls were successful with eight teams willing to put their weight behind the idea and the Celtic eSports League was born.

The next step was to find eSports athletes who would represent the clubs.

“Most of the players have played in tournaments in the UK or Ireland regularly featuring in the Top UK football gaming tournaments.” Said Wilson. “We approached some; asked for an opinion on our idea; they loved it; wanted to play regularly and that’s how we picked them up.”

Wilson has an excellent idea when it comes to finding the stars of the future.

“We would like to host some physical events in cities like Cardiff and Edinburgh,” Said Wilson, “That way we can hopefully tap into the mass market of players who find the Celtic eSports League after watching a live event and then make their way into the elite part of our league.”

The elite part of that league begins on the 16th January 2017. The players will wear the club’s strip, and all games will be streamed live on Twitch.tv/sportego (the league’s first sponsor). As the league is a new concept, they are hosting a special pre-season cup to test the technical side of things and iron out any kinks before the January launch.

“Deloitte has said that by the end of 2016 the eSports market will be worth $460m, but by 2019 it will be worth $1.1 billion,” Said Wilson, “so a lot of the clubs want to get involved, but there is no clear pathway. We wanted to approach interested organisations who want to be innovative and forward thinking and bring them together in a league format.

“Our idea gives the clubs access into the online market like never before. Yes, they are doing a lot of social media work but this is a new platform entirely, and I think clubs need to be involved.”

Premier League clubs, Manchester City and West Ham, both have professional eSports athletes representing their clubs in FIFA contests throughout the world. It makes perfect sense. Football clubs need to keep pace with what’s happening in the world. The pitches are barren; the bedrooms is where the football action takes place these days.

“Clubs are seeking to identify new fans who will one day follow their club.” Said Wilson. “The ones who enter the eSports industry are the ones pushing the boundaries. eSports is going to be huge, so it makes sense for clubs to get involved early. The Celtic eSports League are hoping to provide the teams and the players with the platform to promote their brand across the UK and further.”

A football club is not for Christmas.

And if the fans of tomorrow are picking and choosing these lifelong commitments after playing FIFA then that’s exactly where the football clubs need to be and why Wilson and his team are onto a winner.