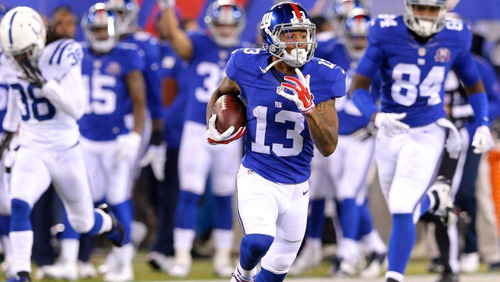 The New York Giants have not fared well as a home underdog, which is a concern as they host the Dallas Cowboys in an NFC East rivalry game that involves playoff positioning. The Cowboys are 4-point favorites against the Giants with a 47.5-point total for Sunday night.
Odds courtesy of OddsShark.com

The Giants, who are 8-4 SU and 5-5-2 ATS, do have an opportunity to put up points against an 18th-ranked Cowboys defense which has generated a paltry 11 takeaways. Manning can make up for many deficiencies, but production has been hard to come by for slot WR Victor Cruz and rookie WR Sterling Shepard, leaving the Giants to force passes to Odell Beckham Jr.

Running the ball and pass protection are also trouble spots for the Giants, who are 2-7 SU in their last nine games against teams with winning records. New York is second-last in rushing. The Pittsburgh Steelers, who have only three more sacks than Dallas (26 to 23), overwhelmed Giants LT Ereck Flowers in Week 13.

The Cowboys are 11-1 SU and 9-2-1 ATS. Since that one-point defeat against the Giants in Week 1, rookie QB Dak Prescott has become a much more accurate downfield passer. Prescott and WR Dez Bryant will need to be sharp, since the Giants have an strong cornerback tandem in rookie Eli Apple and high-risk, high-reward Janoris Jenkins. Veteran TE Jason Witten had his first career no-target game in Week 13, but typically performs well against the Giants.

The key matchup when Dallas has the ball will be in the interior of the line, namely C Travis Frederick and RG Zack Martin against Giants DT Olivier Vernon. Dallas is second in rushing and the Giants are fifth in rush defense, so NFL rushing leader Ezekiel Elliott will need to be ready for a grinding game. With DE Romeo Okwara in line to replace Jason Pierre-Paul (sports hernia surgery), it will be interesting to see what the Giants’ front seven does to hassle Prescott and keep him from scrambling.