Home / Business / Bitcoin price could leap over $2,000, thanks to Donald Trump 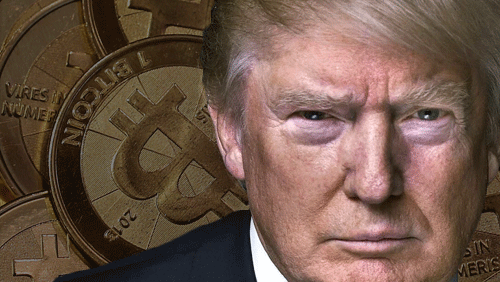 Popular digital currency bitcoin has already surged 75 percent over the course of 2016—but that’s peanuts compared to 2017, when analysts expect the cryptocurrency to ramp up another 165 percent.

More specifically, Trump’s “spending binge” may cause the digital currency to hit over $2,000 next year, according to a report released by Denmark-based Saxo Bank.

During the campaign season, Trump talked about a possible increase in fiscal spending, which could increase U.S.’s national debt—currently at roughly $20 trillion—and triple the current budget deficit from an estimated $600 billion to $1.2-1.8 trillion. This, in turn, could cause the inflation to “sky rocket” and eventually force the U.S. Federal Reserve to hike interest rates faster, resulting the already surging dollar to “hit the moon.”

And the strong dollar, as we all know, will prompt emerging markets to seek an alternative currency.

“Cryptocurrencies are here to stay given the history of booms and busts in fiat money and debt excesses. Bitcoin as the face of cryptocurrencies benefits from this chaos,” wrote Saxo Bank’s global macro strategist Kay Van Petersen.

Traders have been calling bitcoin a “safe haven” asset that shows its strengths as an investment vehicle “in times of macroeconomic uncertainty,” such as recession, which incidentally, is where the United States is heading, an investment broker said in July.

According Saxo Bank, bitcoin could easily tripe in price if Russian and Chinese governments decide to accept Bitcoin as a partial alternative to the U.S. dollar.

“If the banking system as well as sovereigns such as Russia and China move to accept Bitcoin as a partial alternative to the USD and the traditional banking and payment system, then we could see Bitcoin easily triple over the next year going from the current $700 level to +$2,100 as the blockchain’s decentralized system, an inability to dilute the finite supply of bitcoins as well as low to no transaction costs gains more traction and acceptance globally,” Steen Jakobsen, chief economist at Saxo Bank, said.