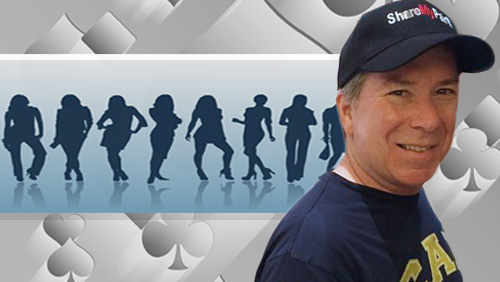 Steve Miller and the team at ShareMyPair are offering players the opportunity to represent the brand in a selection process designed to reward talented players with a sponsorship deal.


Chicken Soup For The Soul co-creator, Jack Canfield, told me that I could do anything that I wanted to do. At the time, I was working as a manager in a rail freight company, and I had to admit, if I had been rubbing a lamp I wouldn’t have requested to be the best railwayman in the world.

At the time, I loved poker, so I rubbed my imaginary lamp and asked for a career playing cards. I think it was defective because I never did get to play cards. Instead, I ended up writing about other people playing cards.

But I didn’t complain.

It was better than working on the Iron Road.

And I did my first gig for free.

Some people baulk at that idea, but you have to start somewhere. How are you going to be seen unless you raise your head above the parapet?

Steve Miller, President, Card Shark Media Inc., and the creator of the ShareMyPair (SMP) Hand Replayer is a man who likes to give people a bunk-up above that parapet.

The 2017 ShareMyPair Ones to Watch

Taking a leaf out of the World Poker Tour (WPT) playbook, ShareMyPair, is offering potential stars of 2017 a sponsorship deal with the company if they succeed in becoming a ShareMyPair Ones to Watch.

The winners will represent the brand at live tournaments and will see their SMP hand animations given pride of place on the app and the website. They will also be in good company with the likes of Phil Hellmuth, Greg Raymer and Jonathan Little acting in ambassadorial roles for the enterprise.

To become a ShareMyPair ‘Ones to Watch’ you have to submit your request to Steve and the team at [email protected]. From there you will undergo an evaluation process that takes your performances into consideration (Hendon Mob/PocketFives/Global Poker Index/Etc). A strong social media following is desirable, as is being a Twitch broadcaster. Global geographic diversity is also important as SMP looks to expand their brand.

And once you have gone through all of that, the finalists will undergo a Skype interview where you get to state why Steve should pick you to represent his brand

If you are fortunate enough to be chosen as an SMP Ones to Watch, you will be required to post a minimum number of hands on SMP on a monthly basis and will have the option to wear SMP branding at live events. Providing feedback on other people’s hands within the community is also part of the package.

Remember what Jack said – you can do anything you want to do and that includes being picked up by an online poker room as an ambassador. All you have to do is get your name out there and what better way to do that than to work alongside the likes of Phil Hellmuth at SMP.