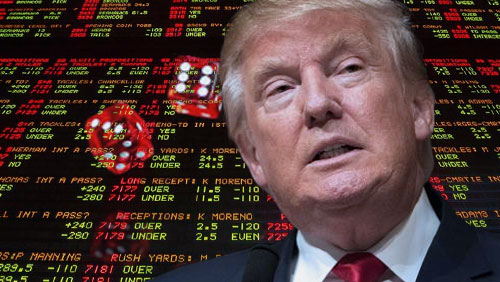 Bloomberg reported that members of the American Gaming Association (AGA) is now on the hunt for someone who will sponsor legislation that will overturn a 1992 ban on sports betting.

Of the fifty states, only Nevada, Delaware, Montana, and Oregon are allowed to offer betting on athletic competitions under a federal law called the Professional and Amateur Sports Protection Act. AGA data showed that some $149 billion in illegal sports bets are placed annually.

AGA senior vice president Sara Rayme is optimistic that the legislation will turn smoothly especially since Trump, a former casino operator, is in the helm of the US government.

“He was a former casino owner, he understands the business,” Rayme told the business news website.

There had been efforts from the gambling industry to push for sports betting legalization for the past years but their campaign end up dead, no thanks to the opposition from some leagues and groups opposed to gambling in general.

In the case of New Jersey, the court has rejected its plans to legalize sports betting in the state.

Hope for legalization of sports betting, however, flickered after Trump pulled a surprising victory against Democratic presidential-nominee  on November 8. Trump, in his previous interviews, has vocally supported sports betting legalization.

“I’m OK with it, because it’s happening anyway,” Trump said in an interview last year on Fox Sports 1. “Whether you have it or don’t have it, you have it. It’s all over the place.”

Aside from having Trump in their side, Rayme is banking on the momentum on the merger of daily fantasy sports giants DraftKings and FanDuel.  They used this development to renew its call for change.

“DraftKings and FanDuel have sped up the debate on legalizing sports betting by demonstrating its popularity and mainstream nature,” Rayme said in a statement. “We’re building on the momentum created by DFS to remove the federal ban on sports betting.”

But when it comes to online sports betting legalization, the AGA remains undecided.

The issue is different from online gambling, which is legal in three states. The industry is split on whether consumers should be allowed to bet online, with some casino operators, most notably Las Vegas Sands Corp. Chairman Sheldon Adelson, opposed.

Could Joe Biden be the president who brings online poker back to America?
Paul Seaton
21 January 2021
.