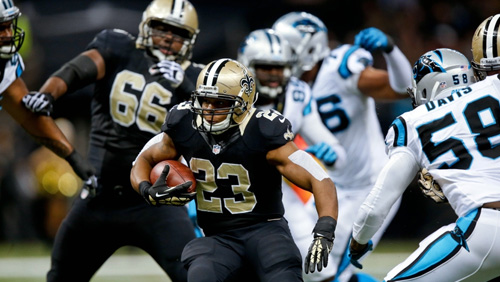 With Drew Brees going against Cam Newton and the New Orleans Saints and Carolina Panthers each being porous against the pass, there is anticipation that the Thursday Night Football betting matchup could be a shootout.

The Panthers are listed as the 3.5-point favorite against the Saints with a 52.5 total. Carolina is even money to cover with the Saints, who are 6-1 against the spread in their last seven games against their NFC South counterparts, listed at -120 to cover.

The teams have combined for an average of 64.5 points in their last four meetings.

Brees and the Saints are 4-5 straight-up but 6-3 ATS overall. The future Hall of Fame quarterback can still engineer a dynamic passing game with help from WR Brandin Cooks, WR Willie Snead and an offensive line that has allowed only 13 sacks.

However, LT Terron Armstead (quad, knee) will not play, which could lead to the Saints having to adapt quickly to keep the likes of DE Kony Ealy, OLB Thomas Davis and OLB Shaq Thompson from disrupting Brees’ rhythm. If Brees gets time, he should be able to find holes against a pass defense that allows 7.8 yards per attempt.

The Panthers, 3-6 SU and 2-6-1 ATS, need a win to have any shot at returning to the playoffs. They are 8-3 ATS in their last 11 home games at Bank of America Stadium and Newton, WR Kelvin Benjamin and TE Greg Olsen are facing a defense which is allowing 8.1 yards per pass, fourth-worst in the NFL.

In the teams’ first meeting, Saints DEs Cameron Jordan and Kasim Edebali were able to blitz off the edge and induce hurried throws from Newton. The Panthers will need to carry over the improved pass protection they have shown in recent games. That will help them avoid falling into catch-up mode and being less able to make full use of RB Jonathan Stewart.