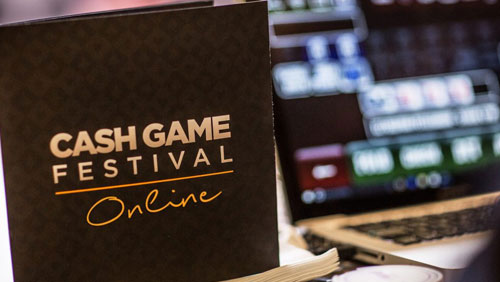 From humble beginnings in Tallinn, Estonia, the Cash Game Festival Tour has become a unique experience not offered by another beast, and this week the team drop their anchor in the fish-filled waters of the iPoker Network.

From Oct 24-30 the Cash Game Festival crew will take their show online at participating iPoker skins such as NetBet, William Hill, and Bet365. The online event will feature 30 Twitch streamers competing in the event including the likes of Bryan Paris, Leon Lewis and Jason Glatzer. The action will be streamed in one-hour blocks starting at 6 pm UK time on players individual Twitch channels.

The Online Cash Game Festival is bold as it is brazen. Unlike a tournament, it’s a lot more complicated to stream hole cards for everyone sitting at a cash game, but the team believe they have a sensible solution. Beginning at 10 pm Mon-Fri UK time, the individual streamers will compete for three hours on a password protected iPoker table so everyone can view the hole cards. The commentary team of Brandon Allen and Enri Orav will also have access to all of the individual streams and will appear on them all throughout the week.

There will be a daily champion who will take part in a final on Saturday at 10 pm UK time with the winner earning a €2,000 Cash Game Festival package for the upcoming event in Tallinn, Estonia Nov 16-20. The €2,000 package includes €800 to blow on the cash game tables, accommodation for two people for two nights at the Radisson Blu Sky Hotel, and money for travel expenses, food and the likes.

The event ends on Sunday with a feature table streamed live from Bet365 Poker where six players will compete in a game of Six-Plus Hold’em. Once again individual streamers will comment on their play with the commentators hopping from one stream to the next to give the viewing audience a look into each player’s thought process.

With the United Kingdom & Ireland Poker Tour (UKIPT) closing for business and an undetermined schedule for its replacement tour, the Grosvenor United Kingdom Poker Tour (GUKPT) can feed hungry mouths at the top of the UK live tournament scene.

The tour has released the 2017 schedule. Not much has changed as the tour moves into its 11th season. The only change is the return of GUKPT Leeds after being cut from the 2016 calendar so the casino could work on damage caused by flooding.

Here it is in full: