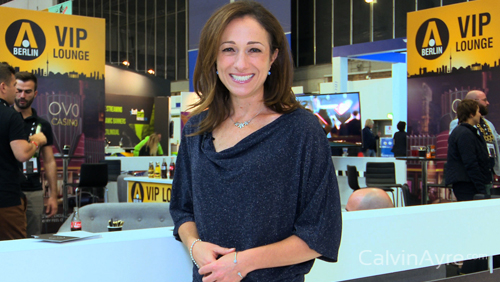 The Berlin Affiliate Conference (BAC) kicked off today at the Messe Berlin, one of the biggest events of the year dedicated to the iGaming affiliate industry.

Without a doubt, the minute delegates walked into the exhibition hall todaythe fun and playful vibe of the conference was contagious with loud music playing, massive booths with freebies on display, masses of people and of course, open bars.

The Star Games booth was impressive this year and had special entertainment for affiliates in the form of a gladiator-themed photo booth.

Joshua Farrugia of Star Games told CalvinAyre.com his team chose to reveal their new Football Gladiators game at the BAC and therefore brought along gladiator gear and a gorgeous model for affiliates to dress up with and take some pictures.  Hard copies of the pictures were available immediately and digital copies were sent to affiliates who entered their email address into the photo booth machine.

Farrugia was impressed with the crowd at BAC today and said affiliate and other delegates were having a great time with the photos, a perfect way to spread the word about their new game.  Star Games also have a brand ambassador deal with famous footballer Rio Ferdinand and included a huge photo of Ferdinand in gladiator gear on the side of their massive booth display.

Today’s celebrity appearance was over at the Energy Bet booth where delegates were invited to arm wrestle with famous bodybuilder Robert Bruneika.

Bruneika was fun and friendly to interact with, providing a great source of entertainment for delegates and quite a bit of attention to the booth. Unsurprisingly, he confirmed with CalvinAyre.com no one was able to succeed in beating him in an arm wrestling match and then kissed his bulging biceps.

Simona Pinterova of Energy Bet told CalvinAyre.com of the recent brand ambassador deal her company has signed with Bruneika and what a pleasure it has been having him at the BAC.  She described his personality as “gorgeous” and said the promotion was a huge success for Energy Bet’s first day at the show.

BAC is also a fruitful event for iGaming operators and affiliate programs to attend even without a booth, confirmed Wonderlino’s CMO Erik Hellqvist.

Wonderlino.com is a new casino launched by a team of experienced iGaming professionals coming from companies such as Unibet and other powerhouses. Hellqvist told CalvinAyre.com his biggest market is Germany and the BAC was the best place for him to schedule meetings with affiliates who have German traffic.

Hellqvist also revealedWonderlino has released a commercial on German TV which has greatly increased brand awareness and said from December 1st to keep our eye out for some exciting changes to the casino.

Alongside today’sexceptionally stimulating expo floor, the BAC also featured a selection of sessions dedicated to the iGaming affiliate and financial/binary industries.

Today CalvinAyre.com sat in on the SEO track for iGaming Affiliates and truly enjoyed the Google Penalties talk delivered by Fili Wiese of SearchBrothers.com.

Wiese is a “Former Google” and used to penalize websites himself, so he’s a sincere expert on the subject who also personally does the SEO work with his clients as opposed to passing it along to a team of SEOs.

“The number one principal of Google is they put the users first”, Wiese said as he opened his presentation.  He explained how Google views users in the engine as theirs and not yours, therefore there are penalties when Google feels the user experience is compromised in any way.

Google has nothing against affiliates he said, they are only concerned about their users.”Good affiliates add value”, he said.

Wiese advised affiliates who wish to avoid penalties to keep an eye on Google’s “Webmaster Guidelines” as it’s a live document with constant updates and said to check the blog as well.  He provided additional advice on how to avoid manual penalties such as:

1)Have a unique sales proposition.

2)Focus on users and conversions.

3)Actively and always do link building, but don’t do it for the sake of manipulating page rank, rather build links specifically for traffic.

He went on to explain how affiliate programs provide content for affiliates, but warned if too many affiliates are simply copying such content and republishing it, Google won’t like it. Instead he suggested creating original reviews, ratings and product comparisons.  “Look at data, get your own data”, he added.

Wiese suggested affiliates should gobeyond just generating content and used Sky Scanner as an example of how to do it right.  He said Sky Scanner compare prices and put out the data in an intuitive way for the user and try to get the most conversions. “Gather data and add value.  Don’t be one of the many, be one of the unique ones”, he said.

If affiliates do get penalized for whatever reason, Wiese said to file for reconsideration and be brief and simple with the wording.  If no action is taken by Google try again he said, but try using different wording and be patient- don’t re-submit every day, rather wait for a few weeks or a month before sending through another request.