G.A.M.E Get Innovative With the Introduction of Protection Poker

Gaming Advancement Marketing Entertainment LLC (G.A.M.E) continues to innovate with the introduction of Protection Poker, a form of Texas Hold’em that ensures players with a 65% advantage, when all in, win at least 20% of the pot.

Poker isn’t broke. It doesn’t need fixing. But games are evolving, as is the level of human IQ, and poker needs to keep up with that progress. 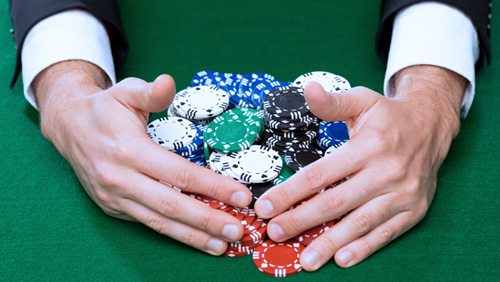 One area that has come under scrutiny in recent times is the speed of the game. When it comes down to the thrill factor, there is nothing more laborious than having to wait an eternity for a player to make a decision.

Gaming Advancement Marketing Entertainment LLC (G.A.M.E) has been paying attention. Earlier, in the year, their patented Action Clock was used during the World Poker Tour (WPT) Tournament of Champions and the feedback from the players showed it to be a success.

WPT commentator, Mike Sexton, believes that the Action Clock is the best thing that’s happened in poker forever. WPT Tournament Director, Matt Savage, wasn’t a fan until he experienced the clock in action, and he changed his mind.

The WPT introduced the clock with minimal fuss. The dealers found it simple to use, and the players liked the extra dimension that the clock brought to the game.

So what’s next for the Action Clock?

G.A.M.E has plans to use it at the $3m Guaranteed Southern California Poker Championships scheduled to take place across four of the biggest card rooms in California, this November.

I see some great sponsorship opportunities for timepiece creators the world over.

G.A.M.E is not resting on its laurels.

With the Action Clock booked for the SoCal Championships, G.A.M.E has set their sights on the Aria Poker Room for the introduction of their second innovation – Protection Poker.

This new form of poker takes the existing rules of Texas Hold’em and introduces a change that rewards skilful play and evens out the ups and downs to keep people in the game longer.

Here are the scenarios where the theory of Protection Poker applies:

2. There must be either a flop, turn or river to be dealt.

3. The betting action must have come to a stop.

If these scenarios are in play, then if a player has a statistical advantage of 65% or higher, they immediately win at least 20% of the pot.

Protection Poker will provide dealers with a calculator to do the math, and it helps reduce bad beats and therefore the sanity of some of the players. There is also a marked reduction in tilt as the leader will win some of the money in the middle even if someone sucks out on them.

ProtectionPoker is here! Get your $$ in as dominating fav (65%) & you’re protected. It’s a better way to play. #Aria https://t.co/Pq57KwSMoi

What’s your view of the introduction of the Action Clock and Protection Poker?