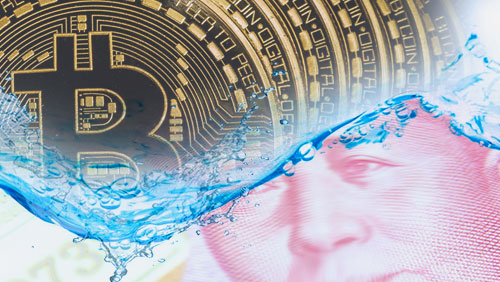 The price of bitcoin is on a ten-week high, thanks to increased demand in Asia amid worries over the serious devaluation of the Chinese yuan.

This week, the yuan dropped it its six-year low against the U.S. dollar at 6.72 per dollar, which, according to Reuters, is the weakest rate since September 2010. In comparison, bitcoin saw a 3 percent jump in value—breaking the $630 ceiling. This is the popular digital currency’s strongest since July.

The weakened yuan was partly attributed to the week-long holiday in China, which celebrated the Chinese Golden Week that follows China’s national day. However, this isn’t the first time that the devaluating Chinese yuan has pushed the prices of digital currencies up.

In May, the price of the digital currency surged by as much as 15 percent, which some market participants partly attributed to the devaluation of Chinese yuan. Trades involving Chinese yuan are believed to account for about 95 percent of the current bitcoin trading volume this year, according to a CoinDesk research.

The last time the yuan fell to the 6.7 mark versus the U.S. dollar was in July, and state banks intervened to remedy the situation. This time, however, analysts predict further depreciation due to China’s central bank’s decision to set a weaker guidance for the yuan. The uncertainty could prove to be a boon for virtual currencies like bitcoin, which traders have been calling a “safe haven” asset that shows its strengths as an investment vehicle “in time of macroeconomic uncertainty.”

“The Chinese central bank’s decision not to intervene in stabilizing the yuan means traders are running scared. Bitcoin is a port in the storm,” Charles Hayter, founder of digital currency website Cryptocompare, told Reuters.

A trader told the news outlet that “the market is holding a wait-and-see approach towards the central bank attitude.”