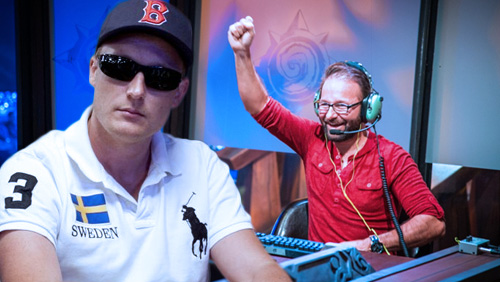 Daniel Negreanu has a trophy cabinet bigger than most, and he has another accolade to cram into it after reaching Legend status on Hearthstone last week.

I don’t know much about the game, but I can read, and I have learned that making Legend status is as tough as my wife’s high heel. But what else do you expect from a man who has won six World Series of Poker (WSOP) bracelets, two WSOP Player of the Year (POY) titles, two World Poker Tour (WPT) titles, and has won more money playing live tournaments than anyone alive or dead?

I AM LEGEND!!! 8-1 run with Midrange Shaman to finish off back to back Rogues. SO SICK!!! pic.twitter.com/G6BJBphOsb

The first person to congratulate Negreanu on his accomplishment was poker’s very own professional Hearthstone player, Bertrand ‘ElkY’ Grospellier. You may remember, the pair squared off in an exclusive Hearthstone exhibition match at the 2015 Blizzcon Hearthstone World Championships with Negreanu coming away with the victory.

The Team PokerStars figurehead took some time away from the Hearthstone battlefield to talk to PokerNews reporter Frank op de Woerd at the European Poker Tour (EPT) Festival in Barcelona recently.

It’s a great interview, with Negreanu his usual transparent self. The highlights of the interview include his admittance to being stuck $250,000 in his live mixed game action; and how the PokerStars World Championships of Online Poker (WCOOP) $102,000 Super High Roller is “a little nuts to have it as a reentry.”

The Canadian goes on to share his belief that online high stakes action has damaged online poker, “I think online poker would’ve been better off today if there had never been any high stakes poker online,” and how Guy {Laliberte} lost $28m playing at those stakes.

He also talks about his involvement in a James Cameron documentary about the misconception of veganism, his new podcast, and his desire to get Phil Ivey on as a guest.

Here is the interview in full.

Jeppsson’s victory takes him over the $8.6m mark in all-time online tournament earnings. He is a former PocketFives World #1, and he had to beat another former World #1 on the final table after Nicolas ‘PKaiser’ Fierro made the cut before falling in fifth place. Fierro has won over $9.1m playing online tournaments so it was a final table dripping with success.

It seems skinny and podgy Ronaldo aren’t the only players bearing that name who enjoy spending some recreational time on the PokerStars and Full Tilt tables.

A Russian player going by the name ‘Ronal7do’ has become the sixth winner of the Full Tilt Deal jackpot. The kitty had reached $384,040.92 by the time the #7 had smashed it. 50% of that haul went to the Russian, and the other half went to the players who had competed in The Deal during the previous 12 hours. There were 1,157 people, and they received $165.96 each.

It is the biggest jackpot ever breached. The previous highest was $233,851.96 when another poker playing football fan ‘dbecks23ex’  from Canada won the first one in September 2015.