• Partnership includes use of Club social, digital and promotional assets, including in-stadium branding

Tottenham Hotspur today announced FUN88 as its Official Betting Partner in Asian and Latin American territories for the second time. 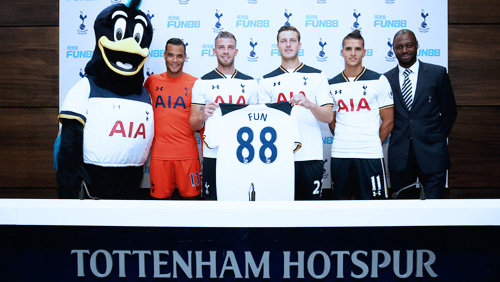 The two-year agreement will see the Club and FUN88 work together again – following a successful relationship between 2012 and 2014 – to engage with Asian and Latin American sports fans through a range of online and offline activities.

FUN88, founded in 2008, is an online gaming company with a large following in Asia and Latin America that offers sports betting, live casinos, slots and keno games, all of which are available in multiple languages.

Tottenham Hotspur has over 200 million supporters across both regions with dedicated, multi-language digital channels currently serving its growing global fanbase.

FUN88 will be given access to advertise across these popular channels, along with in-stadium branding at the Club’s home matches.

Fran Jones, Head of Partnerships, Tottenham Hotspur, said: “We are delighted to welcome FUN88 back as one of the Club’s official partners.

“The continued growth of our international fanbase makes Tottenham Hotspur an attractive partner for any brand aiming to engage passionate sports fans around the world.

“Our popular digital channels will give FUN88 an ideal platform upon which to continue its growth in the Asian and Latin American regions.”

Nathan Walker of FUN88 commented: “It’s a pleasure to reconvene our partnership with Tottenham Hotspur for the next two years.

“Our previous sponsorship of the Club boosted FUN88’s brand reputation and status in the industry, so we’re thrilled to once again be working with the Club.

“We are looking forward to engaging with Tottenham Hotspur’s huge fanbase, with emphasis on Asia and Latin America.

“We’re excited about the next two years and are looking forward to the 2016/2017 season starting.”

Founded in 1882, Tottenham Hotspur Football Club has a tradition of playing an entertaining and attacking style of football. The team finished third in the Premier League in the 2015/2016 season and has a multi-national squad of players. Tottenham Hotspur also has:

– A global following in excess of 400 million, with strong supporter bases across the UK, the USA, China, Asia and Southern Africa, including 150 Official Supporters Clubs worldwide

– An award winning Foundation that has created 2.5 million opportunities to help enhance the lives of people in its local community through education, employment, health and social inclusion programmes.

– Over eight years in business, Fun88 has built its credibility and trustworthiness in Asia, with the solid base, Fun88 aims to expand its business to other regions.