Home / Poker / There is An Online Poker War Coming, And The Enemy Isn’t Human 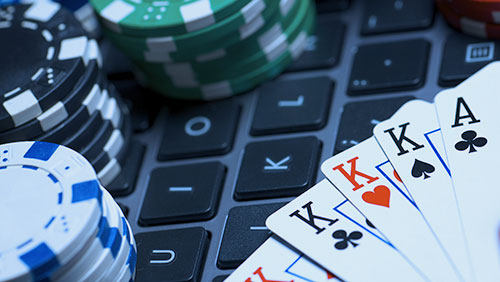 A 2+2 poster by the name of themadbotter admits to operating a successful poker bot for a six-month period and candidly talks about the dark arts before turning the other cheek and pretending it was all a ruse.


When Jon ‘Pearljammer’ Turner won the Card Player Poker Tour (CPPT) Venetian Main Event a few days ago, I was pissed. He has won over $7.7m playing online poker. And yet he took part in a tournament that profited a man hellbent on destroying that very game.

Sheldon Adelson is not alone.

We are at war.

And it’s when we are at war that we are at our most vulnerable.

Earlier this evening I was at a party. I had to excuse myself.

“Where are you going?” Asked my wife’s cousin.

He asked me what ‘work’ was. I told him I was a writer.

“And you write about, what?”

“I used to play online poker, but I stopped because it’s rigged.”

It’s an all too common comment. I hear it when I play live, and it’s now following me to parties.

A discussion began on the reality of cheating in poker. I argued that there was always going to be cheating in a game where money was at stake, but it’s rare and most likely to occur at stakes that wouldn’t affect the likes of him or me.

He argued that the advancements of Artificial Intelligence (AI) would render my argument moot.

“There will be no online poker.” He assured me.

Speaking at the 2016 Code Conference, Elon Musk was asked to share his view that humanity was nothing more than a version of The Sims played by a superior intelligence. “40 years ago we had Pong.” Said Musk. “That’s what games were. Now 40-years later we have photo realistic 3D simulations with millions of people playing simultaneously and it’s getting better every year. Soon we will have virtual reality and augmented reality.”

Pong was my favourite game because it was my only game. I loved playing hockey. I can still hear the dot banging against the back of the goal like it was yesterday.

“If you assume any rate of improvement at all then the games will become indistinguishable from reality.” Musk continued. “So given that we are clearly on a trajectory to have games that are indistinguishable from reality, and these games can be played on any set top box. It seems to follow that the odds that we are base reality are one in billions.”


When Neo met The Architect in The Matrix Reloaded, he learned that he existed in the sixth version of The Matrix.

“Interesting, that was quicker than the others.” Said The Architect when responding to Neo’s response time to his question.

“Others?” Pondered the numerous versions of Neo, who were present in TV screens surrounding the room.

It seems Elon Musk believes we are in The Matrix which begs the question, who is The Architect?

The Matrix is a classic story coated with the theme of AI v humanity, and of course, humanity always wins. But I’m not so sure that’s the case when it comes to online poker. After leaving my party assured that my argument was sound, I arrived home to the news that someone called themadbotter was making me look like a mug.

“I have decided to retire from botting and focus my energy on something more meaningful.” Wrote themadbotter

‘Something more meaningful’ equates to spilling the beans on a poker bot career that has seen him walk away from Americas Card Room (ACR) after winning $30,000 playing mainly 50nl and 100nl No-Limit Hold’em (NLHE) cash games over a six-month period.

“I hope to shed some light on the current economy of botting and to help people understand the relationship between botting and poker sites.” Wrote themadbotter.

And he does a bloody good job. So good that he inadvertently gives his identity away, and backtracks by telling all and sundry that he was nothing more than a ‘bored troll’ who wanted to apologise to ACR and their players for any undue stress he may have caused.

If he was nothing more than a troll, then he had me fooled. His detailed knowledge of the poker bot industry seemed exemplary. He answered every question thrown at him in a highly articulate, technical, and knowledgeable manner. Only when the mask started to slip did he retreat into the shadows from whence he came.

The 2+2 thread began 17 July. Themadbotter said that his poker bot had earned $30,000 playing over 500k+ hands. He told the thread that 2016 bots came equipped with ‘stealth technology’; that ‘finding or building a bot is the easy part’; and that the hardest, and the reason he quit, was the constant tweaking that he needed to make to the bot to ensure it remained ahead of the competition from a detection point of view.

Themadbotter even went as far as to say that it was all this hard work that removed any essence of guilt from his value system because he believed he worked harder than most grinders. He also made it clear on numerous occasions that he didn’t believe what he was doing was cheating, and even entered into a philosophical debate over whether bot programming was any different from all the HUD/software tools that grinders use to gain an edge over the fish.

“Most of the regs today play with an incredible amount of non-human assistance.” Wrote themadbotter. “Try separating a reg from his HUD, his Flopzilla, his GTO 10bb tourney stack handbook, etc. The only “human” thing they do is physically click the button that all of this assistance indicates is the best to click.”

I can’t help thinking he has a point.

Themadbotter obviously took pride in his work. He told the thread how is bot was programmed with stealth mode, would randomly sit out of the action and takes breaks like a human would, never played more than six hours at a time, switched tables frequently, joined waiting lists, typed messages into the chatbox, and even misclicked. He even programmed the randomness factor to ensure it would never play hands the same way, nor value bet the same amounts. It was interesting to note how important hand history collators such as Hold’em Manager (HEM) and PokerTracker (PT) were for the bot operator.

And it is a problem.

“I would suspect that 10-15% of the players on ACR 50nl and below are bots.” Wrote themadbotter.

Is Online Poker Heading The Way of The Dodo?

If Elon Musk’s theory is right, then poker bot operators will continue to create ever more advanced models. It’s happening. The bot named Cepheus beat Limit Hold’em. The bot called Claudico nearly beat Doug Polk and co in No-Limit Hold’em with programmers saying it wouldn’t be long before they found the keys to the Cadillac. And now you have people like themadbotter competing in games that my grandma would play in for a bit of fun during the X-Factor commercials.

Fortunately, if the poker bot operators can create ever more intelligent machines, then so can the online poker rooms. But it’s going to take a coordinated effort.

There is a scene in the first Season of Game of Thrones where the Wildling prisoner is talking to Theon Greyjoy about the impending war. Rob Stark is amassing a vast army to march south to take on the Lannisters. Daenerys Targaryen is also getting ready to assault from beyond the sea. And the Wilding woman thinks they are all mental because the real war is surely beyond The Wall where all these undead zombie White Walkers are preparing to kill all of humanity.

I reflect on this scene because this is what’s happening in poker right now. The war between humans is the wrong war. Online poker rooms should unify their coordinated efforts and fight the machines. Ultimately, what’s the point in earning regulation and licensing if flesh arrives to compete with flesh and all they find are bots?

Before themadbotter fled the scene of the crime, he said that the answer to what the sites could be doing to eliminate bots was ‘easier that many of you think’, before rolling out a few paragraphs of complicated shit that only men in white coats could understand.

“The actual costs would be minimal, and probably 90% of bots wouldn’t survive.” Wrote themadbotter.

Years ago when I worked for the rail industry, I was given the job of creating a small task force to take on one of the most powerful trade unions in the world – The Associated Society of Locomotive Engineers and Firemen (ASLEF).

I started by giving some of their former member’s managerial positions and then invited them to join my negotiating team. It was an essential move for our negotiation strategy.

If themadbotter is happy to earn $30,000 in six months and then shut down his operation, hire him and pay him treble that to work alongside you to create AI defence systems that can keep out the most advanced bots.

Or maybe we are all just wasting our time.

Or in the words of Elon Musk:

“We should hope that that’s true {being a part of a simulation} otherwise if civilisation stops advancing that’s maybe due to some calamitous event that erases civilisation. Either we are going to create simulations that are indistinguishable from reality or civilisation will cease to exist.”


And here I am worrying about online poker.

*Note, I use the male vernacular when referring to themadbotter, but that’s only to make it easier for me.