Home / Press Releases / One: Dynasty of Champions Set for 2 July in Hefei 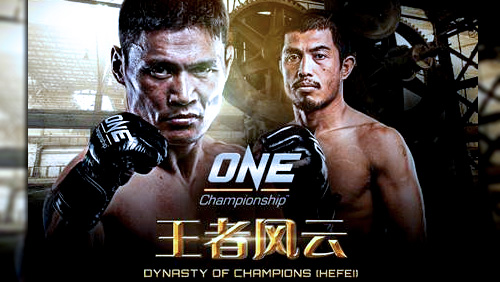 20 June 2016 – Hefei, China: The largest sports media property in Asian history, ONE Championship™ (ONE), has just announced its return to mainland China with another stacked fight

card featuring the absolute best in local and international mixed martial arts talent. ONE: DYNASTY OF CHAMPIONS is set to electrify the Hefei Olympic Sports Center this 2 July in the great city of Hefei. In the main event, former featherweight champion Narantungalag Jadambaa will take on top contender Eric “The Natural” Kelly of the Philippines.

Tickets for ONE: DYNASTY OF CHAMPIONS are available at www.onefc.com.

CEO of ONE Championship, Victor Cui stated, “It feels so good to return to China where we know a lot of MMA fans are hungry for more world-class mixed martial arts action. We have some great matchups to look forward to along with an exciting flyweight tournament featuring local homegrown talent. Our main event between Narantungalag Jadambaa and Eric Kelly also promises another memorable battle that fans will not want to miss.”

Former ONE Featherweight World Champion Narantungalag Jadambaa of Mongolia is coming off an impressive Von Flue choke submission victory over highly-regarded Japanese veteran and former ONE Lightweight World Champion Kotetsu Boku last May, proving that he is not just a fearsome striker but also a world-class grappler. Jadambaa is one of the top talents at featherweight, and will look to make his way back into title contention if he can get past the Philippines’ top contender, Eric Kelly.

Featherweight standout Eric “The Natural” Kelly of Baguio City is highly-regarded as perhaps the best homegrown mixed martial artist to come out of the Philippines. The Filipino combines solid striking techniques with high-level grappling skills, which has resulted in 9 impressive submissions out of 12 victories. Although Kelly is considered among the premier talents in his weight class, he will most certainly be tested against former champion Narantungalag Jadambaa in his next bout.

Li Kai Wen of Tianjin is ONE Featherweight Beijing Tournament 2014 Champion and is one of the most fearsome young competitors from China. Li utilizes his vicious striking and aggression to overwhelm his foes which has resulted in a series of impressive highlight reel stoppages in his young career. On his way to becoming a complete mixed martial artist, Li will be faced with a tough challenge in fellow rising star Keanu Subba.

At just 21-years of age, Keanu Subba is a former amateur MMA champion and is one of the most promising young talents in ONE Championship’s featherweight ranks. Subba is on a three-fight win streak that saw him stop countryman Rayner Kinsiong by technical knockout in his last bout. With momentum in his favor, the promising young fighter will look to continue his success by taking on the electrifying Li Kai Wen next.

With 26 professional fights on his resume, Aung La N Sang is arguably one of the world’s most renowned Burmese fighters whose constricting style of fighting has earned him the moniker of the “Burmese Python”. Born in Myitkyina in the mountainous Kachin State, Aung belonged to an ethnic minority known as the Kachin. His complete MMA skillset has earned him two straight victories inside the ONE Championship cage and now, he takes on capable Russian foe Aleksei Butorin.

21-year old Wu Ze of Shenyang is one of China’s most talented young fighters. He has three victories inside the ONE Championship cage since making his promotional debut in June of 2015, with an impressive rear naked choke submission victory over Hui Qiang Wu. Known for his aggressive striking style and capable ground game, Wu Ze will now take on fellow Chinese fighter Zheng Xiao Liang.

Zheng Xiao Liang of Beijing, China made his professional mixed martial arts debut just last April, and is making a quick turnaround to compete once more, this time in Asia’s largest and most prolific MMA promotion. The 27-year old combatant will get a chance to make a great first impression when he steps inside the ONE Championship cage against the flashy Wu Ze.

American Roger “El Matador” Huerta of Austin, Texas has been in the mixed martial arts game for more than a decade and has a wealth of fight experience under various promotions on his resume. He has competed against some of the best fighters the world over, and has amassed a stellar 22-8 overall record. With a solid background in Muay Thai and Brazilian Jiu-Jitsu, Huerta will return to the ONE Championship cage to take on grappling ace Ariel Sexton.

Ariel “Tarzan” Sexton of Vancouver, Canada is widely-considered one of the most skilled grapplers in the world. With a black belt in Brazilian Jiu-Jitsu earned under the watchful eye of the legendary Renzo Gracie, Sexton boasts of 8 submissions out of 10 total victories. He is coming off two straight wins by submission and will look to impress the crowd with a similar performance in his next outing. After carefully honing his skills in preparation for his next bout, Sexton is now ready to take on the extremely versatile MMA veteran, Roger Huerta.

Ann “Athena” Osman of Kota Kinabalu is Malaysia’s fighting belle. Training out of the coastal locale of Sabah, the female warrior hones her craft at Borneo Tribal Squad, advancing her skills in various disciplines such as wrestling, jiu-jitsu and Muay Thai. A well-rounded mixed martial artist, Osman likes to overpower her opponents and is extremely aggressive, always looking for a finish. Osman will take on Haiat Farag in her return to the ONE Championship cage.

Haiat Farag is a former Egyptian freestyle wrestler who competed at the 2008 Summer Olympics in Beijing. Also a former Wushu practitioner, the 29-year old Farag combines lightning-quick and pinpoint striking with tenacious grappling and mat skills. Farag makes her professional mixed martial arts debut inside the ONE Championship cage against Ann Osman of Malaysia.

The Hefei Flyweight Tournament semifinals and finals matchups will take place the day before ONE: DYNASTY OF CHAMPIONS, Friday, 1 July, and will feature Bu Huo You Ga against Maimai Tituo Heti, and Li Hao Jie against Tang De Pan. In the alternate bout, Zhang You Liang takes on Tang Ren Xing. The winners will go on to compete in the tournament final match.

ONE Championship is the largest sports media property in Asian history. Headquartered in Singapore, the world’s most exciting mixed martial arts organization hosts the largest sports entertainment events across Asia featuring the best Asian mixed martial artists and world champions, all signed to exclusive contracts, on the largest media broadcast in Asia. ONE Championship is broadcast to over 1 billion viewers across 118+ countries around the world with some of the largest global broadcasters, including FOX Sports, Setanta, MNC, Astro, Thairath TV, ABS-CBN, TV5, Physique TV, MYTV, HTV, Esporte Interativo and more.