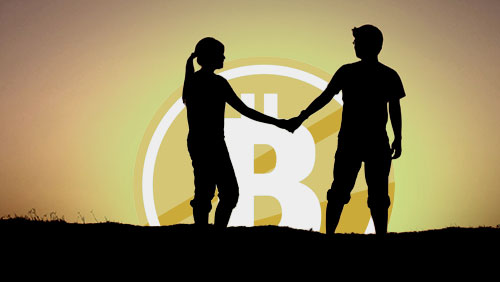 How far will you go for a marriage proposal?

Candlelit dinners and flowers are out for a couple who recently decided to go all-in on the concept of modern romance and professed their undying love using the bitcoin blockchain.

A couple of days ago, an individual named Sun Chun Yu popped the question on the blockchain network, which was mined by Chinese bitcoin company, HaoBTC. Sun posted the message, “Zhuang Yuan, will you marry me?” for which he received a resounding “Yes!” in reply.

That proposal was actually worth 25 bitcoins, or about $18,353 in today’s price—not a bad way to declare. On Friday, the price of bitcoin fell to $734.14 with close to 15.67 million bitcoins in circulation.

Technology publication Motherboard, which broke the news, was a bit skeptic about the validity of this “tale of crypto-love.” The news site pointed out that the messages were added by HaoBTC, which could mean that the couple was really going to get hitched or the bitcoin company’s employees were simply cooking up a scheme “to promote its new mining pool, which people can join for a fee and get a cut of the reward coins.”

HaoBTC has yet to comment on this romantic take on the blockchain.

Sun Chun Yu and Zhuang Yuan are not the first people to turn to blockchain to keep a lasting record of their romance. According to newsbtc.com, the distributed ledger—which keeps a record of all transactions happening in the bitcoin network—has recently become a popular option for tech savvy, love struck couple who want to “immortalize” their love.

Even Satoshi Nakamoto, the mysterious inventor of bitcoin, included some text in the first batch of bitcoins that was created in the “genesis block.” But unlike the couple’s message, Nakamoto’s text wasn’t very lovey-dovey: “Chancellor on brink of second bailout for banks.” Not romantic at all.