Home / Poker / The WSOP Introduce Copag Playing Cards But What Route Did They Take to Get to That Decision? 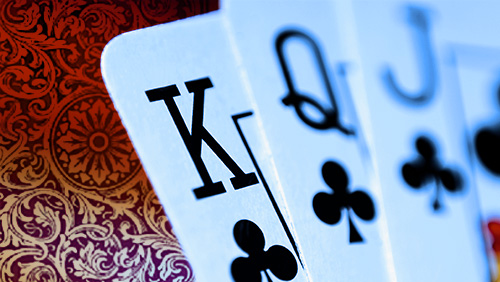 The World Series of Poker has agreed on a multi-year agreement with the card manufacturer Copag prompting Lee Davy to question how the customer’s worldview fits into the equation?

The World Series of Poker (WSOP) has continued with their trickle of change announcements after declaring a new multi-year deal with playing cards manufacturer Copag.

According to their website Copag cards are 100% PVC plastic and last 20 to 50 times longer than regular paper cards. They cannot be bent or torn and are nearly impossible to crease or mark.

The WSOP is in good company. Copag is the official playing card used on the European Poker Tour (EPT). The World Poker Tour (WPT) doesn’t have an ‘official’ deck, instead relying on the equipment used by their casino partners, but the majority of them also use Copag as the playing card of choice.

For the first time in the WSOP’s 47 year history, Copag will produce two different decks for the series, with a specially designed deck created for the $10,000 buy-in Main Event.

Modiano or Gemaco Anyone?

The introduction of Copag as the WSOP deck of choice has gone down well on social media. For the 46th Annual WSOP, organisers shook hands on a deal that saw the Italian outfit Modiano become the playing card of choice.

It transpired that the decision gave the WSOP all sorts of headaches after prominent players within the industry, most notably Daniel Negreanu, argued for various reasons that the cards were sub-standard.

There were many faults but the ability to mark them was one of them. This problem became a major issue after numerous high-profile players accused Romanian Valeriu Coca of manipulating the cards to cheat during his deep run in the $10,000 No-Limit Hold’em (NLHE) Heads-Up Championships. An investigation that involved the WSOP and Nevada Gaming Commission found no signs of foul play.

And who can forget the impact that card manufacturer Gemaco has had on the Baccarat industry. Phil Ivey took both Crockford’s Casino in London, and the Borgata Casino in Atlantic City to the cleaners, when he used imperfections on the back of their decks (known as edge sorting) to win millions. Ivey and the casinos are locked in a legal battle over the misdemeanour and how Ivey used it to his advantage.

Are The Players Happy?

They are, and they aren’t.

While the overwhelming feedback via social media is that Copag is an excellent choice, there is still some dissatisfaction regarding the type of Copag deck to be used.

It seems the controversy surrounds Jumbo Index Playing Cards and Four Colour Decks. The WSOP’s latest hire Kevin Mathers (not within his official capacity) listened to the feedback from the players and asked his 29.4k Twitter followers if the WSOP should trial a four-colour deck at ‘tourneys/cash/satellites?’ At the time of writing, 60% of those who have responded said they should.

The WSOP immediately responded to Mathers that they will only use a two colour deck because of issues of colour blindness. Many players who suffer from colour blindness then chimed in by declaring that four-colour decks were not a problem for them and that chip colouration was more of an issue.

So where does all of this lead?

I am afraid it leads to the root cause, and that’s a failure by the WSOP, and other tournament organisers, to have adequate systems in place to know what makes their customers lives better when at the tables.

There is a bloke in my local game who is always asking people to call out the board for him. He is colour blind, but to him, that’s not the problem. He may not see colours in the same we do, but he can still distinguish the shades, and he pays particular attention to the spades/hearts/diamonds/clubs. For him, it’s imperative that we have a Jumbo Index Playing Card.

Now that might piss some of the players off in the game. However, a quick look at the table and you can see the average age of the clientele is well above 50. It makes sense to go with the bigger cards. The minority will have to adjust.

In my personal view, I am not sure the WSOP have systems in place to quickly ascertain what their players want, and I don’t think they know their players as well as they should.

The EPT does this well.

They recently trialled four-colour decks at EPT12 Malta in a couple of their side events. Neil Johnson, Head of Live Poker Operations, PokerStars said that the feedback was positive, although there were some that liked them and some that didn’t.

Steve O’Dwyer is not a fan. Speaking out on Twitter, he said the four-colour decks make it easier for cheating to occur because the suits are more easily identifiable.

However, most of the feedback was unanimously positive for four colour decks. It was also clear that the WSOP should introduce Jumbo Index Playing Cards for the Seniors events.

Pleasing everyone is impossible.

That said, it doesn’t dismiss the need for poker organisations to have a robust feedback system in place and then use the data before making multi-year agreements. It’s imperative that these decisions emanate from the customers heart.

Finally, cost should not be the ultimate deal breaker here. There are too many companies that lie in the presence of the elephants graveyard because of this misguided business notion.

And on that note, I will leave this little ditty in the capable hands of one of poker’s most sensible stalwarts.

I don’t think Modiano gave them super cheap ones.

I assume they created decks to order.