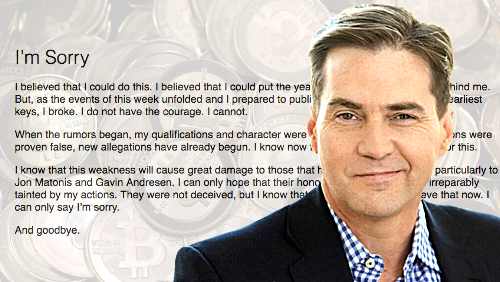 The true identity of Bitcoin inventor Satoshi Nakamoto may forever remain a mystery after Dr. Craig Wright backed out a plan to provide further proof that he is the man behind the mask.

Wright, an Australian academic and inventor, went public on Monday to confirm last December’s media reports that he was Satoshi, the pseudonymous creator of the Bitcoin crypto-currency and its underlying Blockchain technology.

Doubters immediately found fault with Wright’s claims, just as they’d failed to be swayed by the earlier media reports. On Wednesday, Wright vowed to provide further proof that his claims were legitimate by moving Bitcoin mined from the very first blockchain blocks, which, at the bare minimum, would have demonstrated that Wright had access to the digital keys used by the Satoshi identity.

But by Thursday, Wright had an apparent change of heart. In an emotional post to his personal blog, Wright said he’d initially believed that he could “put the years of anonymity and hiding behind me. But, as the events of this week unfolded and I prepared to publish the proof of access to the earliest keys, I broke. I do not have the courage. I cannot.”

Wright claimed that he was “not strong enough” to endure the fresh allegations made against his qualifications and character. Wright acknowledged that his reversal would “cause great damage to those who have supported me,” specifically mentioning tech notables Jon Matonis and Gavin Andresen, who had publicly vouched for the veracity of Wright’s claims. Wright insisted that the pair “were not deceived, but I know that the world will never believe that now. I can only say I’m sorry.”

Wright closed his post with the phrase “And goodbye.” Sources close to Dr. Wright told CalvinAyre.com that he intends to go back to doing what he does best: continuing his education and research far from the public eye.

Whether this is truly the last the world has witnessed of Dr. Wright’s public face remains to be seen. But following the deaths of two other figures at ground zero of Bitcoin’s emergence – Hal Finney and Dave Kleiman – Satoshi’s true identity may remain a D.B. Cooper-style mystery.

Regardless of whether or not one chooses to believe Wright’s claims, it appears undeniable that he was at the very least present during the creation of Bitcoin and the blockchain. And for that alone, he deserves more favorable treatment than he’s currently receiving from the world’s chattering classes.

As many tech blogs have observed since Monday, the true identity of Satoshi doesn’t really matter. Bitcoin and blockchain technology is here and flourishing, particularly on online gambling sites, for which the entire industry should be grateful to all who had a hand in its development.