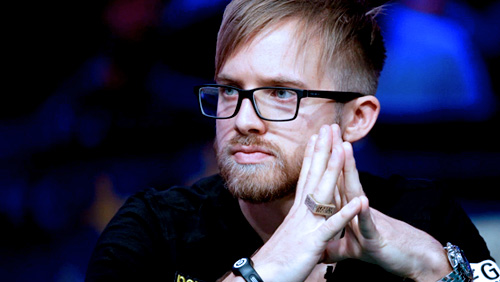 Lee Davy sits down with the former World Champion Martin Jacobson to talk about his recent business trip to China, his views on the dangers of social media, and his early views on the Global Poker League.

Within professional circles, Martin Jacobson is one of the most popular World Series of Poker (WSOP) Main Event champions of recent times.

He ticks all of the boxes.

So if we are going to have a poker boom in the Far East what better role model to ship over there than the Scandinavian with the chiseled chin?

How did the opportunity to travel to China and work with Tencent Poker come about?

“I was approached by a leading representative from Tencent to make a guest appearance on their poker show. I was at the top of their list of names and they were particularly excited to host a former WSOP champion, something they’ve never done before.”

Who went with you?

“My girlfriend; she was a tremendous support to have by my side in a country where I didn’t know anyone from before.”

What was the purpose of your invitation?

“To help grow the interest of poker in China by drawing more attention to their network and particularly the show.”

Alex Dreyfus believes China is the place for the next poker boom, what responsibilities do you think the players in the West have to try and make this dream come true?


“After experiencing it with my own eyes, I definitely second that opinion. It’s tough to have an impact from the West since China is so politically secluded from the outside world. I think the best thing you can do as a player is to do what I did, make the trip over and interact with the players face to face.”


“Starting at the airport in Changsha, I was greeted by poker fans who wanted me to sign anything from a set of red tens playing cards to their bare skin. I later got told that some guys had been driving for hours just for the opportunity to shake my hand. I believe I posed for at least 100 photos with different people and signed just as many autographs in just a few days time. I’ve never experienced anything like it, and it was weirdly just as refreshing as it was exhausting.”

Describe the main highlights of your poker trip?

“Oh, it was definitely to see how genuinely excited everyone were to meet me and to find out how my win had inspired them to play poker.”

Describe the main highlights of your trip from a recreational standpoint?

“All the new impressions which differ entirely from anything I’ve ever experienced before. I feel like almost anywhere you go in the world today, it’s all very Westernized. China is not, and it’s probably going to stay that way as long as the government can control it. We saw some buildings which were (allegedly) over 3000 years old. Very cool even for someone who’s born and raised in Europe.”

As a former World Champion, what’s your view on Joe McKeehen’s recent outburst on Twitter, and the subsequent writings of how players should handle themselves on social media?

“I haven’t been aware of any controversial tweets from Joe, but I will say this. Just because you’re suddenly, a World Champion doesn’t mean that you should change who you are. Unless it feels like a natural process, having reached a huge career milestone which could enforce some sort of personal growth.

“I’ve learned that social media can be a powerful but also very dangerous weapon. Once you reach any sort of fame, you’re constantly under the loophole, and everything you post will be (mis)interpreted in a million different ways by thousands of people. Therefore, I always think twice before I post something these days and actively try to stay out of any sort of controversy. Whatever he said it shouldn’t be taken to heart. At the end of the day, it’s just his opinion.”

How many GPL teams approached you to play for them and was it a surprise to join Montreal?

“It was Montreal, all the way baby! Although I was not sure that I would get drafted. I had a pretty casual approach to the league before the draft, but once I got picked in the 2nd round, I got extremely pumped to be a part of it.”

What’s going on behind the scenes at Montreal? How do you all communicate? How do you plan strategy? How do you choose who will compete where, when and how?

“Wouldn’t you like to know! We have an excellent synergy within our team, and I think that’s part of the reason why we’ve started off so strong. We do all our communication online and Marc {Ladouceur} has so far been very open minded when it comes to the decision on who plays who.”

If I gave you one more wildcard pick to play alongside you for Montreal who would you pick and why?

“Sam Chartier – mainly because he’s a close friend of mine and one of the funniest characters on the tour. He’s also the definition of Montreal.”

What have you learned in your first few weeks playing for the GPL?

“That you never know what to expect. Sometimes you have to adapt when suddenly there are six cards on the board!

“Seriously, though, I think the league provides a very intriguing and forward-thinking format which is only going to grow the market and make poker fun again. I’m very excited about being a part of the journey!”