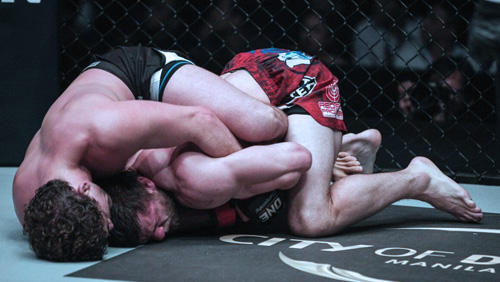 15 April 2016 – Manila, Philippines: The largest sports media property in Asian history, ONE Championship™ (ONE), put on a spectacular show at the 20,000-capacity Mall of Asia Arena, featuring the absolute best in local and international mixed martial arts talent. Geje Eustaquio turned in a masterful performance against young Malaysian prospect Gianni Subba to win by unanimous decision in the co-main event. In the main event, ONE Welterweight World Champion Ben “Funky” Askren overcame a spirited performance from Russian contender Nikolay Aleksakhin to win by unanimous decision in a five-round Super Fight.

In the main event of the evening, the United States’ Ben “Funky” Askren overcame a tremendous effort from Nikolay Aleksakhin of Seltso, Russia to win by unanimous decision in a five-round Super Fight. Askren put on an amazing display of high-level wrestling to score on multiple takedowns, maintaining control of Aleksakhin on the ground while doing damage from the mounted crucifix position. Aleksakhin connected on a few solid strikes, but it wasn’t enough to trump Askren’s overall solid performance.

In a much-awaited bantamweight contest, Team Lakay’s Geje “Gravity” Eustaquio completely outclassed top Malaysian prospect Gianni Subba in an exciting three-round bout in front of Eustaquio’s home crowd in Manila. Eustaquio kept Subba at bay all night at the end of his lightning fast kicks and sharp counterpunching. Subba could not get his offense going as Eustaquio dominated from end-to-end to earn the unanimous decision.

Lightweight standout Lowen Tynanes of Ewa Beach, Hawaii defeated highly-regarded Japanese veteran Koji “The Commander” Ando by unanimous decision in a gruelling contest. Tynanes used his superior wrestling skills to control the action in the cage, while also getting the better of Ando in the stand-up with his powerful leg kicks and straight right hand. After three rounds, Ando couldn’t amount to much as Tynanes ran away with the judges’ nod.

Filipino-Australian fighter Reece “Lightning” McLaren showed the world that he is an absolute force to be reckoned with by dominating former combat sambo world champion Muin “Tajik” Gafurov over three rounds. McLaren completely shut down Gafurov with his impeccable mat and cage control, displaying a high-level grappling game that Gafurov had no answer to. McLaren wins a unanimous decision in a very technical affair.

A memorable lightweight contest ensued between Filipino combatants Honorio “The Rock” Banario and Vaughn “The Spawn” Donayre. Banario dominated the striking exchanges, landing the right hand over the top frequently and with good, solid power. The former featherweight champion also controlled action on the ground, almost finishing the fight with an armbar submission, showcasing his improved grappling. In the end, Banario did just enough to earn the unanimous decision.

In an intense, crowd-pleasing fight, Martin “The Situ-Asian” Nguyen and China’s Li Kai Wen brought fans up to their feet with a display of fierce and explosive striking exchanges. The two fighters unloaded on each other from the opening bell. As they traded blows, Li dropped Nguyen with a punch but Nguyen was able to withstand the damage and recover. Once on the ground, Nguyen’s superiority showed as he was able to control Li’s back and finish the fight with punches from the top.

Team Lakay’s Joshua Pacio debuted for ONE Championship with a solid victory over Rabin Catalan, remaining an unbeaten young prospect. Pacio controlled the action from top position after scoring on a big slam over Catalan, landing some heavy blows in the first round. In the second round, Pacio again scored with a big overhead slam. This time, Pacio was able to step over into mount and finish the fight with ground-and-pound.

Team Lakay’s lady warrior April Osenio impressed the crowd with vastly improved grappling skills to win by submission over British-Filipina fighter Natalie Gonzales Hills in a battle of female atomweights. Although Hills was able to take Osenio down successfully, it was Osenio who was dangerous on the back. In her rubber guard, Osenio needed only a brief moment to latch on the fight-ending armbar.

Indonesia’s Sunoto overcame an ill-advised kimura attempt by Filipino contender Burn “Hitman” Soriano to win by technical knockout. After Sunoto found himself in mount position, the Indonesian fighter unloaded a volley of strikes to force the stoppage just minutes into the first round.

Team Lakay’s Danny Kingad made an impressive ONE Championship debut with a victory over Malaysia’s Muhamad Haidar to kick off an exciting evening at ONE: GLOBAL RIVALS. Kingad showcased his wrestling ability by shooting for a double-leg takedown and taking Haidar for a ride with two emphatic slams before finishing the Malaysian off with ground-and-pound.

Official results for ONE: GLOBAL RIVALS