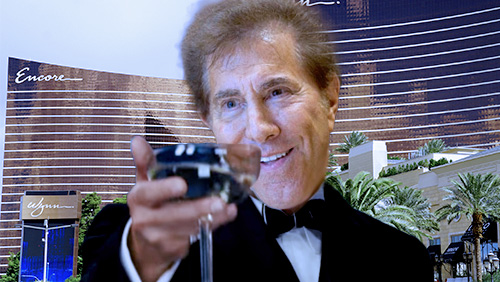 Casino mogul Steve Wynn has some choice words about the less fortunate.

On Wednesday night, the Wynn Resorts chairman told investors that his company is like a luxury brand—much like Chanel and Louis Vuitton—that  focuses on people with money.

“Rich people only like being around rich people,” Wynn said in a presentation. “Nobody likes being around poor people, especially poor people. So we try and make the place feel upscale for everyone, that is to say, we cater the people who have discretion and judgment and give them a choice and we are consistent in that.”

In fairness to the man who is worth an estimated $2.7 billion, the incendiary gaffe does not represent Wynn’s entire remarks. The casino boss was probably pointing out that what his company is not like other casinos and hotel chains because it tries to create “an environment of wealth” at all of his properties that will draw all kinds of crowds.

Included in this plan is a new development that will see a 38-acre lagoon attraction, a 1,000-room hotel tower and a small casino built behind his resorts in Las Vegas.

The proposed development, tentatively titled Wynn Paradise Park, will rise on the 130-acre golf course located east of Wynn Las Vegas and Encore, according to Vegas Inc. Wynn told investors the project could cost as much as $1.6 billion, but it still needs to be approved by the casino company’s board of directors.

Wynn described the Paradise Park as an entertainment attraction featuring water activities and a fireworks show “just like Disney.” Customers will have to pay admission to enter the park.

The plan to build an entertainment attraction in Las Vegas reflects Wynn’s mindset about the U.S. gambling hub. “I don’t give a damn if they put a nickel in a slot machine. I want them to pay my admission, I want them to stay in my rooms—I want them to drink my booze and eat our food.”

But it’s probably not a good idea for the billionaire to spew provocative stuff about “poor people” if he wants to attract visitors, especially non-gamblers, to come to his properties.