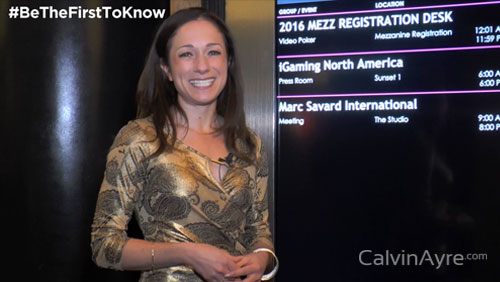 Grove started off by saying DFS has had success in the US by positioning itself as “entertainment first, then wagering” and he threw out the question of why online poker and casino haven’t had success from the same playbook.  He said online poker companies knew what they were doing was always outside of the rules, but it was different for DFS.

When it comes to skill games, Grove said the sector starts conversations in Nevada, but its not something that’s going to “light the floor on fire” as things currently stand.  Rather, skill games start a much broader conversation on how the casino floor can change, but doesn’t end it.

Stutz posed the question to the group of whether social gaming is hurting or helping the growth of online gaming in America.  Grove said from a commercial angle its helping, social has done a great job with app share, but from a regulatory advocacy – the move towards real money regulation- social gaming has done more a disservice to the industry.  Social has “diminished the urgency to push for real money”, he said.

Regarding eSports, Schorr brought it to the Downtown Grand and said “undeniably it’s a growth market internationally” and that “Vegas has a unique opportunity to position itself as the destination for eSports”.  He said as a spectator sport alone it fits, for example MGM has a major LOL event in the next few weeks and another in July, clearly setting the path for an eSports schedule at their arena.

Grove echoed Schorr’s sentiments and said in terms of wagering eSports is on par with rugby and F1 for European operators, an impressive feat considering eSports has grown from zero over the course of just a few years.

Regarding eSports and DFS Grove said, “This thing you’ve never heard about is about two times the size of the thing you can’t stop hearing about”.

“This segment is poised to explode in a way that you really don’t see very often”, Grove said and compared its magnitude to that of in-play to UK operators.

Pokertstars’ entry into New Jersey is not something Grove sees as moving the needle to regulation across the US and belives Amaya’s insider trading acquisitions and ties to the Panama Papers will hurt the chance of California making any moves to regulate.

Sportsbetting regulation across America was also discussed and in terms of likelihood and timelines, Grove said there are three pillars to watch:

2)PASPA and how the DFS bills intersect with PASPA

3)Leagues and what their public attitudes are towards sports betting

Much of this afternoon was dedicated to millenials and how to appeal to this important demographic as a gambling company.  Today’s Generationalism panel featured Roberto Coppola of YWS Design & Architecture, Lovell Walker of MGM Grand Resorts, Schorr and moderator Roger Gros.

The term “millentials” is quite loosely thrown around amongst the gambling industry and beyond, so panelists spent some time discussing what it really means.  Walker said millenials are more of a lifestyle than an age between 21 and 35- they can be 50 years old, he said.  Walker also made the point that all millenials are not a “one size fits all” model and to think like high school- there are sub-segments such as jocks, nerds, etc.

Other comments made regarding millenials include Coppola’s point that games for the demographic need to be easily accessible and intuitive.  Walker emphasized the environment must change but the games can stay the same and that millenials are a “look at me” generation with a love for things like Snapchat and Instagram.  “Millenials are very much an egocentric generation”, he said.

This afternoon’s Next Gen panel touched on many of the issues above and featured Daniel Sahl of UNLV, Rahul Sood of Unikrn and Marcus Yoder of Gamblit Gaming.

Sahl said the games people want to play are changing, in particularly the younger generation and he said the real opportunity for growth are for new ideas to come in and offering new products to players. “It will be an exciting time over the next 5 years”, he said.

One of the challenges we face today is how to provide the right environment to engage players, perhaps a more social space.  The traditional gaming spaces casinos offer today are not very accommodating to millenials, for example if there is a group of six who want to play slots together.

Creating the right space is something Sood agreed with as well, saying he has seen gamers carry their computers to play a social setting and to do this inside a casino would be “epic”.  Yoder agreed and added that casinos create what we don’t have at home.