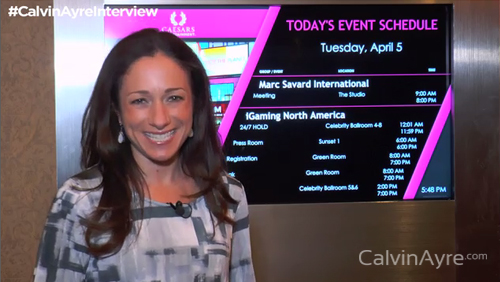 iGNA has been designed to bring together professionals working in the online and land based gambling industries interested in the regulated US market.  Including today and over the next few days, delegates will gather for a series of panels, networking sessions and a lunchtime awards ceremony on the final day.

After sitting through today’s panels, its clear the event has progressed from discussing mostly regulated online poker and casino in America to including DFS, skill gaming, iLottery and eSports in just about every session.  This expansion should come as no surprise as not much has changed in the regulated US online poker and casino market since Nevada, Delaware and New Jersey opened up their doors.

The biggest news in the US-regulated online poker space as of late is PokerStars’ entry into New Jersey’s market, a process that literally took years and ironically was approved just before the Amaya insider trading allegations came to light.

Today’s opening “Executive Panel- The New Deal” session featured Michael Cohen of Caesars Interactive and Eric Hollreiser of Amaya, the first time representatives from Caesars and Amaya appeared on stage together to have a productive and friendly conversation.

CalvinAyre.com columnist Rafi Farber was right in his prediction that both parties would play nice today.  Hollreiser mentioned several times Caesars had the foresight to get involved with the regulated online US market early and Cohen sent praise to PokerStars for growing the New Jersey market.

Hollreiser emphasized how complicated the process was to obtain a license in New Jersey vs. the rest of Europe and what a milestone the acceptance into market means to PokerStars.  He said Stars seems themselves as poker first but they are growing their product portfolio and bringing experience and innovation from the regulated markets to those new products.

When it comes to the New Jersey market Hollreiser said, “we’ve grown that market somewhat and hope to continue growing it”.  He also said Caesars is a “huge and great competitor” and “they had foresight to start Caesars Interactive far in advance of the market today”, a “brilliant” move and “its this type of innovative thinking that makes the market grow”.

When asked why they changed their opinion from opposing to welcoming Stars’ entry into the New Jersey market Cohen said, “We advocated a bad actor provision 4 years ago” and that “the world has changed”.  He said Amaya came in and bought Stars, so its a very different company now and that they “got rid of some of their historical problems and I’ll leave it at that”.  Cohen said after Amaya’s purchase, his organization was happy to leave the decision in the hands of the DGE as they are thorough in their process.

As a side note, with the news that broke today regarding the Panama Papers and the possible links to Amaya’s insider training allegations, it will be interesting to see how the DGE reacts.

Anyway, back to the panel.  Both Cohen and Hollreiser agree once New York and Pennsylvania regulate online gambling we’ll start to see some momentum in the greater US market.

Cohen made the point that Nevada and New Jersey are both gambling states so their regulation of online gambling was not a huge surprise, but once states like New York and Pennsylvania jump on board, other states will follow.  Hollreiser agreed and said it will be easier to justify large marketing spends to increase awareness once more states are regulated as the New Jersey market alone will not provide enough return.

Long time online gambling affiliate Bryan Bailey talked about his recent launch of the US-facing CasinoMeister.us, an affiliate site catering to the regulated US market and the current opportunities that lie within it such as dog racing, DFS, etc.  He shared that only a small percentage of his Casinomeister.com site was coming from the US, roughly 13%, so it’s a slow moving project but his plan is long term.

Bailey also shared that a number of New Jersey residents are still unaware online gambling has been regulated in the state and education within New Jersey and across the US of what is legal and what is not is still a big issue.

Today’s payments panel featured Neil Erlick of Paysafe Group, Matt Katz of CAMS, Joseph Pappano of Vantiv and Andrew Zarnett of Deutsche Bank.  The biggest challenges payments companies are facing in the regulated US gambling industry were covered along with the usual DFS discussion.

Katz started off by emphasizing payment processors are not set up to operate state-by-state and this is a huge challenge in itself.  Erlick agreed and said plenty of customers had a terrible first experience in the New Jersey market when trying to deposit money so they got frustrated and they left.

Erlick said the industry needs to educate customers on alternative ways to deposit money and should teach them of solutions such as ACH.  “If a credit card fails it’s the responsibility of the operator to offer an alternative- pre-paid card, cash- consumer should always have the ability to deposit”, he said.

All panelists mentioned payment issues are going beyond just online casino but also include DFS, skill, iLottery, eSports.  At present DFS is the largest space, but   the issue for processors is avoiding “guilt by association”.  eSports was also mentioned as an area of huge opportunity.