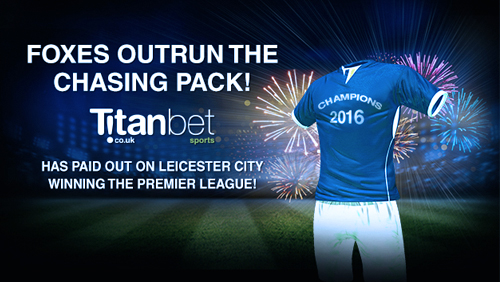 UK Sportsbook Titanbet.co.uk have sensationally declared they are paying out ALL bets on Leicester City to win the Premier League, regardless of what happens in the remaining eight games of the season, as a reward to their customers.

Titanbet.co.uk made the decision – which sees them pay out a significant amount to winning customers – after the Foxes beat Newcastle United on Monday night.

Claudio Ranieri’s men were as high as 5000/1 with Titanbet.co.uk to win the Premier League on the opening day of the season.

But they have held top spot since a 3-0 victory over Stoke City at the King Power Stadium on January 23rd and had shrunk to 5/4 favourites to take home the title at the time of Titanbet.co.uk’s decision.

Russell Yershon, UK Sports Manager for Titanbet.co.uk, spoke of his delight at the decision.

Yershon said: “Leicester’s title charge has been the feel-good story of the season and has gained consistent interest from all over the world. As this season has been an unforgettable one, we are seeking to reward our customers with another moment to remember by paying out on such an achievement.”

He continued: “Commendations to Leicester for taking their title fight this far and hopefully they can see the job through in what will be the most remarkable season in the history of the Premier League!”

A year ago to the day the Foxes were rooted to the bottom of the Premier League table and relegation seemed a near-certainty. But the summer appointment of Ranieri in place of Nigel Pearson has proved a shrewd decision.

The Italian has managed to get the best out of the likes of Riyad Mahrez and Jamie Vardy who have been integral to the title charge, who have dominated the goalscoring charts throughout the campaign.

Titanbet.co.uk is powered by the world’s largest online gaming software developer Playtech, a publicly-traded company on the London Stock Exchange (PTEC.L). Titanbet.co.uk customers can expect an exceptional and fully-customisable betting experience. Our mobile product is second to none and offers sports betting opportunities on the go – anytime, anywhere. We’re proud to offer early pre-match betting lines, exciting live bets, and some of the best odds on the market. All staff live and breathe sport, and their mission is to offer UK-based sports enthusiasts a top of the line sports betting experience.