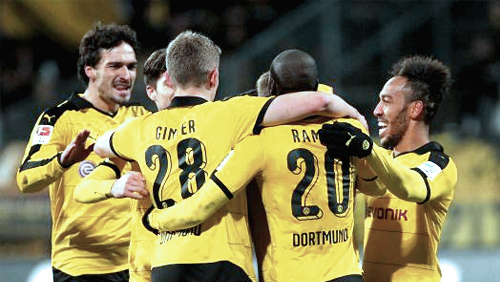 The first leg of the Europa League Round of 16 is in the books and the favourites Borussia Dortmund thrash Spurs; Liverpool does likewise against a woeful Man Utd, and much more.


Earlier in the week, I heard a pundit talk about how fantastic it was that the Europa League had so many mouth-watering ties. He was, of course, referring to Liverpool v Man Utd and Borussia Dortmund v Spurs games. However, there was a slight catch. Only two of the four teams turned up to play.

Louis Van Gaal’s side traveled to Anfield knowing they had stuffed Liverpool twice in the Premier League this season. This tie was different gravy. The two teams have faced off over 200 times, but they have never played against each other in Europe.

Nobody with any football nous believed there would be anything but a Liverpool victory in this one, given United’s woeful performances of late, but the way United went down was, in the words of Robbie Fowler, “disgraceful”.

Liverpool dominated from whistle to whistle, but the two goals that have effectively sealed their advancement into the quarter-finals were highly contentious. Memphis Depay was ruled to have clipped the heels of Nathaniel Clyne as he sped into the box, but it was a soft penalty. Daniel Sturridge stepping up to score his first European goal in the 20th minute.

Liverpool could have been light years ahead had it not been for another incredible performance from David De Gea. If United continue to play like this, and I can’t see anything changing, the lad will be playing his football at the Bernabeu next season.

Not even the bus that is De Gea could prevent Firmino from scoring his third goal on the bounce. Michael Carrick was brought on in the second half to play in a back three, and it was the Geordie who was left holding his arms in the air after his cock up allowed the Brazilian to slam the ball high into the net in the 73rd minute.

Liverpool go to Old Trafford for the second leg in a week’s time knowing they have a two-goal cushion, and a single goal will leave United having to score four – that is not going to happen.

The only team, the bookies, feel have a better chance of lifting this trophy than Liverpool is Borussia Dortmund. The German side came into this game on the back of a moral boosting draw against Bayern Munich, and unbeaten in 2016. Spurs came in wobbling and with seven changes from their draw against Arsenal.

People complain that football managers belittle the FA Cup. I think Mauricio Pochetttino’s abuse of this cup is a big mistake. At this stage of the season, every game is a cup final, and that means you cannot keep world class players like Harry Kane on the bench.

Pierre-Emerick Aubameyang headed his 33rd goal of the season (it’s tough in the Bundesliga), and Marco Reus bagged a brace, as the Germans effectively sealed their place in the quarter-finals barring an absolute miracle at White Hart Lane at the weekend.

Did anyone else think that Spurs could have won this?

Here are the rest of the first leg results: