Home / Press Releases / ONE: Union of Warriors Complete with 10 Bouts 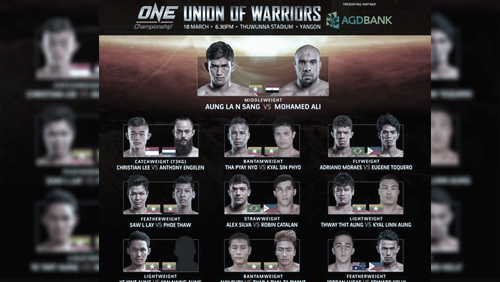 07 March 2016 – Yangon, Myanmar: The largest sports media property in Asian history, ONE Championship™ (ONE), in partnership with AGD Bank, returns to Yangon to bring world-class mixed martial arts (MMA) action to combat sports fans in Myanmar. The Thuwanna Indoor Stadium is set to play host to ONE: UNION OF WARRIORS on 18 March. The card will be headlined by hometown hero, “The Burmese Python” Aung La N Sang, as he takes one Mohamed Ali of Alexandria, Egypt.

CEO of ONE Championship, Victor Cui stated, “Last year, as part of our growth plan to bring opportunities to countries with a rich history in martial arts, we entered Myanmar for the first time in June, bringing our signature brand of world-class MMA to fans here in Yangon with the support of Z Corp, Skynet, the Lethwei Federation, and the Ministry of Sports. This time, we intend to play off our success and establish yet another amazing night of MMA action.”

With 25 professional fights on his resume, Aung La N Sang is arguably one of the world’s most renowned Myanmar fighters whose constricting style of fighting has earned him the moniker of the “Burmese Python”. Born in Myitkyina in the mountainous Kachin State, Aung belonged to an ethnic minority known as the Kachin. He sought asylum in the United States when he was 18 years old, but he was always proud of his heritage. Victorious in his ONE Championship debut, Aung now looks to return to the ONE Cage to headline against Mohamed Ali.

Mohamed Ali of Alexandria, Egypt, is a mixed martial arts veteran with a 10-7 record. He was unsuccessful in his ONE Championship debut against Jake Butler in 2014, being stopped within three rounds, but showed true grit and determination in a tough bout. Ali now looks for redemption as he makes his way back to the spotlight in a main event battle against Myanmar’s Aung La N Sang.

Former flyweight world champion Adriano “Mikinho” Moraes had his title reign cut short in his last bout, dropping a heartbreaking split decision to current ONE Flyweight World Champion Kairat Akhmetov. As champion, Moraes was skilful and dominant, and was rarely opposed inside the ONE Cage. Now, he’s on the comeback trail, and his next bout is against rising Filipino flyweight Eugene Toquero.

Flyweight standout Eugene Toquero is a former celebrity mixed martial arts and fitness coach in his native Manila, Philippines. The 5’5” Filipino stalwart has a knack for highlight reel striking techniques and operates at a pace which opponents find hard to keep up with. In his last bout, Toquero improved his record to 8-2 with a technical knockout victory over China’s Li Wei Bin. Now he faces his toughest test to date in Brazil’s Adriano Moraes.

Christian Lee, younger brother of Angela “Unstoppable” Lee, has impressed in his first two outings in ONE Championship. Lee is riding the momentum of two stoppage wins inside the ONE Cage, one by highlight reel knockout and the other by crafty submission. Lee looks to continue his early success but will face a stern test when he takes on Anthony Engelen.

Anthony Engelen is a Dutch fighter who trains full-time in Indonesia. Engelen is an exceptional grappler, which makes his overall game a potential war of attrition on the ground. In his last bout, Engelen scored a first-round submission victory, proving that his grappling skills are a force to be reckoned with. Standing in his way is young prospect, Christian Lee.

21-year-old Jordan “Showtime” Lucas is undefeated with eight wins and no losses. He is one of Australia’s top bantamweights and is coming off two straight submission finishes in as many outings. The talented Lucas will now face a stern challenge from Team Lakay’s Edward Kelly in his ONE Championship debut.

Edward “The Ferocious” Kelly is the younger brother of ONE Championship standout Eric Kelly. One of the brightest featherweight talents to emerge from the Philippines, Kelly brings Team Lakay’s world-renowned Wushu Sanshou to center stage as he showcases his skills inside the ONE Cage. Kelly is looking to get his ONE Championship career back on track with his bout against Jordan Lucas.

Robin Catalan of the Philippines is making his ONE Championship debut against 33-year-old Alex “Little Rock” Silva of Brazil. Catalan is a mixed martial artist and trainer currently based in Metro Manila. His opponent Silva is 3-1 as a professional, and is riding a two-fight win streak over Robin’s brothers Rene and Ruel Catalan, making this fight especially personal for Robin Catalan.

Local mixed martial artists will also take the stage as they put mixed martial arts in Myanmar on the map. Tha Pyay Nyo does battle with Kyal Sin Phyo, Thway Thit Aung goes up against Kyal Linn Aung,  and both Saw L Lay and Phoe Thaw also return to ONE Championship against each other. All these three local fights will be featured on the main card. In the preliminary bouts, Nay Ruby takes on Thar A Thal Ta Pwint, and Ye Yint Aung battles Yan Naing Aung.

Fans from around the world can witness the action online via live streaming at http://www.onefc.com/livestream. The event will be available for purchase at just US$9.99. For more updates on ONE Championship™, please visit www.onefc.com and follow Twitter and Instagram @ONEFCMMA and Facebookatwww.facebook.com/ONEFCMMA