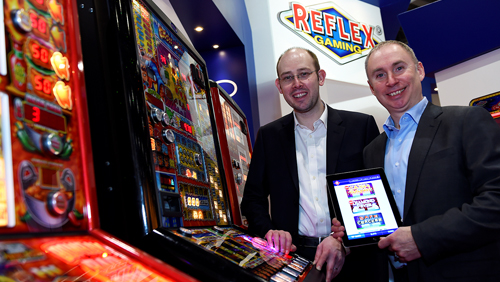 Reflex Gaming, which was named one of the UK’s fastest growing, privately owned tech companies in The Sunday Times Hiscox Tech Track 100, has praised last week’s ICE exhibition, for its success in delivering an audience comprising many of digital gaming’s most important influencers and decision makers.

The Reflex brand, which has earned a market leading position in the supply of gaming machines to street market locations in the UK, was at ICE to demonstrate how it is successfully deploying popular gaming content onto mobile platforms.

Reflecting on the ICE experience, Managing Director Quentin Stott said: “Over the last two years we have sharpened our focus on creating digital games which have both complemented our historic business model and helped us to grow into new areas. We went to what is the world’s biggest and most influential gaming exhibition, in order to demonstrate how we are successfully harnessing a skill set developed in traditional bricks and mortar gaming and applying it to higher stake and prize sectors in the digital space.

“I am delighted to confirm that ICE enabled us to engage with exactly the right audience of decision makers and influencers as we plan the next exciting stage in the Reflex  journey which began with the launch of the business 12 years ago.”

As part of the company’s ICE strategy, Reflex conducted what is believed to be the biggest body of research undertaken amongst social gamers in the UK.  The ‘Reflex Census’ which surveyed the attitudes, motivations and behaviours of 6,130 social gamers was published by Reflex at ICE 2016.