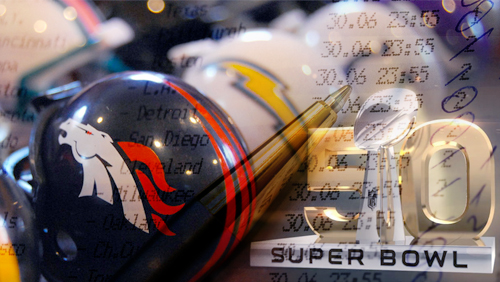 With Super Bowl 50 betting all wrapped up, what’s next?

Super Bowl 50 is a thing of the past and as a football bettor you’re probably thinking of what you’re going to do while you wait for the next season. So courtesy of Bodog, here’s where to place all the money you won from Super Bowl 50.

In the world of betting, the early bird gets the bigger worm. While plenty of winning bettors are cashing in their tickets made these past two weeks, there are also plenty of future-book bettors who are smiling for getting a much bigger pay out.

So it’s time to make some completely irrational decisions about next season and agonize over them for the next several months, as the odds for Super Bowl LI are out.

The Carolina Panthers are tipped to win it all next time around at 7/1, followed by the Seattle Seahawks, Green Bay Packers, and Pittsburgh Steelers at 10/1. The Denver Broncos did not make the top five at 14/1, same with Dallas Cowboys.

The 2016 Grammys are less than a week away and the Academy Awards are on Feb 28.

Taylor Swift is the favorite to win the Album of the Year but her Blank Space isn’t #1 for Record of the Year. Bruno Mars’ Uptown Funk is set at 4/5.

The Big Short is at 27/20 to win Best Picture and Leonardo DiCaprio could finally get his Best Actor Oscar at 1/50.

If you love to punt, you can’t do better than the NBA and the NCAA for betting excitement. This is not an easy pill for football die-hard fans to swallow but better than a self-induced seven-month coma while waiting for the next season to start.

For the first time, the NBA All-Star Weekend is being hosted outside of the United States and the odds have been released for the 2016 Skills Competition. Celtics point guard Isaiah Thomas has emerged as the favorite at 333/100. Houston’s Patrick Beverley has the next best odds at 9/2 while Jordan Clarkson of the Lakers, C.J. McCollum of the Blazers and Draymond Green of the Warriors are all 5/1.

You can also bet on who will win the 2016 NCAA Men’s Basketball Championship with Oklahoma set as the favorite at 7/1 followed by North Carolina at 15/2. Michigan State, Kansas, Maryland, Iowa and Villanova are at 12/1.

If all of these do not serve you well, there’s always NFL free agency and the NFL Draft frenzy, which will begin March 9.