London’s iconic Hippodrome Casino has created a pro poker team, and the first two faces to wear a patch are Kelly Saxby and Chris Gordon.

I am in the Rio waiting to register for the Casino Employee event. Anyone would think we were waiting for tickets to watch a Beatles reunion. The queue is long. It isn’t moving. I am getting angrier and angrier.

There are two young women in front of me. One of them sits down at one of the roulette wheels that’s herding us down towards the solitary cashier. She puts a few bills on a unique number – I can’t remember which – it comes in. Whoops of delight. She lets it ride. It comes in again. More whoops of delight. 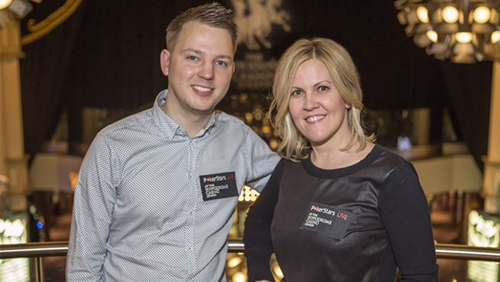 “Kelly, you have got to get in this action.” Said the roulette queen.

The young woman called Kelly sits down, plonks some bills on the same number. It comes in again.

A few days later and I am playing in a WSOP event when I am seated next to the same woman. We get talking. Her name is Kelly Saxby. An American, who now lives in the UK. She’s the type of person to gamble on which raindrop will reach the windowsill first. She is a poker nut.

Over the weekend Saxby, and another pro by the name of Chris Gordon, inked deals to become the first sponsored pros to represent the Hippodrome Casino in London’s Leicester Square.

Hippodrome’s Head of Poker Kerryjane Craigie was delighted with the signings. The appointments are refreshing. Instead of deciding to slap a patch on an established pro who couldn’t give a shit, Craigie went for two players who like to see a few turns and rivers at her home.

“Chris and Kelly are the kind of players that we appeal to here at the Hippodrome. Anyone can come and play; these guys did and now they are playing regularly and successfully.” Craigie told PokerNews.

Gordon has $311,038 in live tournament earnings. His biggest score came in Feb 2015 when he beat 594 entrants in the £200 partypoker WPT Aspers Accumulator event for £22,500. In Sep, he finished fifth in the GUKPT Main Event in Luton.

The Hippodrome is home of the PokerStars LIVE cardroom, and hosts the UKIPT leg in London. PokerStars moved in during a deal brokered in 2013. Speaking at the time of the launch, PokerStars Head of Live Rooms, Kirsty Thompson, called The Hippodrome ‘the premier casino destination in London.’

Saxby and Gordon played their first official tournament as Hippodrome sponsored pros when they competed in the £275 UKIPT Series event. Gordon cashed in 20th place; Saxby failed to make the money. Elliot Panyi took the first prize of £16,590 after beating a field of 351 players.