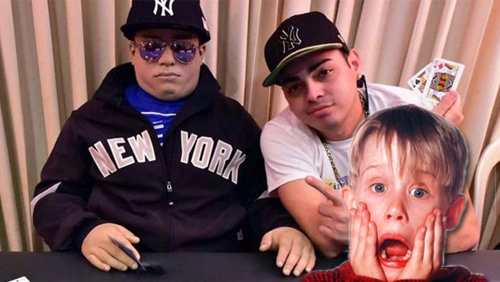 Can you handle gambling with the dead?

In Puerto Rico, a poker fan who recently died was treated to his hobby for the last time. Henry Rosario Martinez died on January 19, and his family asked a funeral home in Barceloneta, located in the northern side of the country, to have the 31-year-old man’s body be embalmed, dressed and seated at a poker table during his wake, UPI reported.

Martinez’s wake had the deceased—dressed in sunglasses, casual clothes and a New York Yankees cap—seated at the poker table surrounded by his family and friends. According to local media reports, a full house of friends anted up the memories and snapped photos of him at the poker table, which was complete with a full stack of chips in front of the dead fan.

The man’s mother told Primera Hora that she wanted his son “to be remembered as a happy person because he was always like that.”

Martinez’s died from alcohol consumption mixed with the taking of prescription drugs, according to Mail Online. Aside from poker, the man was also a fan of reggae music, rooster fights and slots, but his friends decided to go with poker for their final goodbye.

The staff of the Eternal Light Funeral Home was only too happy to help with the family’s request. Jose Mendelez, owner of the funeral home, told the Spanish-language news outlet EFE: “It’s the first time we did this here, but we take it as something normal, because they have done these things in other parts of the island.

Local media said wakes featuring remains of deceased in lifelike poses were becoming increasingly popular in the country. Aside from Martinez, there was also a former paramedic posed in the back of an ambulance and another man posed at a table playing dominoes.

Martinez’s wake was filmed by Puerto Rican artist named Kinki, who turned the gathering into a music video titled, “Rest in peace, my little brother.”