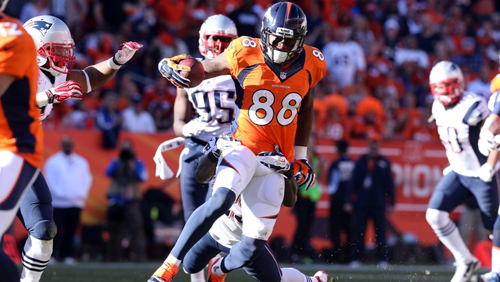 The New England Patriots’ offense looked sharp in their opening drive in last week’s divisional game versus the Kansas City Chiefs, but in their next few drives their performances were so lackluster. Afterwards, Patriot quarterback Tom Brady woke up and negotiated productive scoring drives. It was a close contest at the conclusion of the game only because New England’s defense played inconsistently especially in the second half and overall they gave up a balanced attack; while letting Kanas City rush for 135 yards and pass for 243 yards letting Chief helmsman Alex Smith completed 29 of 50 his passes along with 2 touchdowns.

On November 29th, these teams met here and Denver edged New England by just 6 but Manning didn’t even play which speaks volumes for the Broncos’ running game as they accumulated 179 yards led by C.J. Anderson. In that encounter, New England’s passer Tom Brady had to carry the show because their ground game were non-existent only grinding out 39 yards on 16 carries.

The Bottom Line: Since Denver’s offense is much more balanced than New England’s, blitzing Brady a lot more than they did against Ben Roethlisberger last Sunday is essential because Brady has his full fleet of wide receivers back. Notwithstanding, somehow the Broncos must neutralize Patriot tight end Rob Gronkowski