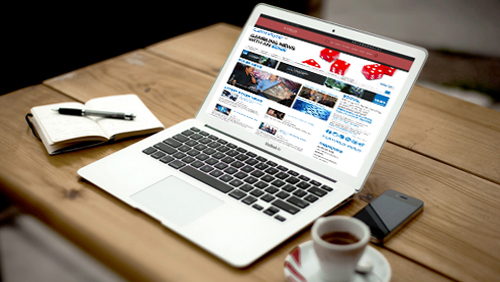 With the year drawing to a close, Lee Davy, takes you for a stroll through his six most popular articles of 2015: starring Brian Hastings, Dan Bilzerian, and Daniel Negreanu.

As a writer, there is a disheartening discord between your best work and your most shareable work. Prodigious talent is often swept away by a wave of scandal, celebrity and sexuality, as was the case in 2015 when I put my fingers to good use and started tapping away.

In reverse order of popularity, here are my Top 6 most viewed poker articles of 2015.

When your headline contains the names of two very different people, it’s tough to decipher which one was the head turner. However, as much as I love Jackie Glazier and the work that she does for poker Down Under, I bet a night in bed with my wife that this article ranked in the Top 6 because of Yuiko Matsukawa.

The accompanying photograph showing Matsukawa, wearing a micro mini skirt while bending over a chair might have also helped to pull in the numbers.

#5 The Ghosts of the WSOP

I wrote the Ghosts of the World Series of Poker (WSOP) after watching the players abusing dealers during the series.

People love a story that creates vulnerability, and my tale of Brad, Mr. Sutherland, and co did just that. Many people were pleasant to the dealers – most in fact – but I remember the minority; the people who abuse or ignore the men and women trying to make the series a better place. I used the term ‘ghosts’ because I believe the one thing worse than abuse is being declared invisible.

Interestingly, the first time I sent this article via my social media circles it drummed up zero interest. I was so happy with the article I sent it out a second time, this time changing the heading to something like, “Here is my Story of Dealers Being Treated Like Shit at The WSOP.”

It was the headline that garnered the attention, not the quality of the work. But it tells me something important – there is tremendous respect for the dealers within the poker community.

Daniel Negreanu is one of the easiest people to interview in the poker community. He doesn’t run. He doesn’t hide. He is always very generous with his time. It can provide you with a challenge. There are a lot of Daniel Negreanu interviews, so how do you make yours stand out from the crowd?

Negreanu never ducks a question. It’s a trait that’s rare in life. It comes with confidence in his vulnerability, and if you share a little with him at the right time, he will open up his heart to you. In the interview, we touched upon his love for Amanda Leatherman, and subsequent heartbreak, his views on religion, and so much more.

The key to interviewing such a great man is to provide him with great questions, and in doing so, he can provide interesting answers.

Who is not going to want to read an article with a headline like that. It reads straight from the Upworthy collective. It was a very short piece, barely over 350 words, and it was also a story covered by every poker writer in the business. I have to assume it was the headline that sent people scurrying over to our site to get a taste of this one.

I am always caught with my moral pants down when it comes to Bilzerian. I am not a fun of his sexist, blow everything up ways. Unfortunately, articles about Bilzerian are amongst the top viewed in our industry, and that’s worrying in itself.

“How do you know about Dan Bilzerian?” I asked my teenage son one day.

“Through your articles,” came the reply.

People on Facebook shared this short article over a thousand times. I found the story wandering through Justin Smith’s Instagram account, and after some digging realized that he regularly nips into the card rooms of California for a spot of high stakes action.

The Instagram picture of the pair also coincided with Pac-Man’s hilarious participation in the Miss Universe contest when he asked Miss USA, Nia Sanchez, “If you were given 30 seconds to deliver a message to a global terrorist what would you say?”

Sanchez didn’t let beauty pageant stars down, managing to get the words ‘world’ and ‘peace’ into her reply.

#1: The Brian Hastings Scandal: A View The Poker World Doesn’t Want to Hear by James Obst

As the Welsh Warbler, Tom Jones, once sang, “It’s not unusual to have a scandal as the number one most popular article of 2015”.

Brian Hastings decided to play on PokerStars, under someone else’s account, and from within the confines of the USA and didn’t tell his fellow high stakes grinders.

While most people kept their powder dry, Australian pro-James Obst did quite the opposite, delivering a soliloquy of superlative savagery. Not only did Obst say exactly what was on his mind on his views on Hastings, but he also delivered a profound message about his views of the toxic egoic side of the business.

His responses were well thought out, thought provoking, and highly contentious.

Hastings responded by winning millions of dollars at the WSOP.