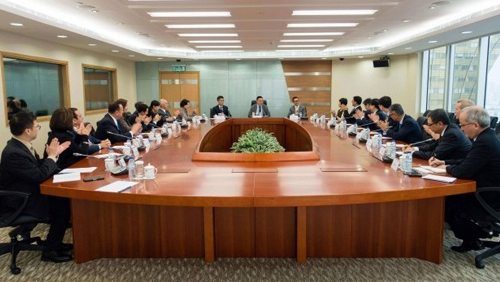 Macau Secretary for Economy and Finance Leong Vai Tac made a pinky swear to help the city’s troubled gambling industry.

Leong met with Macau’s six casino operators for talks about enhancing the city’s economic competitiveness, according to the Government Information Bureau (GIB).

During the meeting, Leong was quoted saying that the government would work closely with the sector to overcome challenges related to the ongoing period of adjustment in the gaming market.

Leong also thanked the gaming operators for their support of the government’s initiatives and encouraged them to continue introducing new non-gaming elements to their properties.

“The local economy had maintained a steady course, with the unemployment rate below 2 percent despite the drop in gaming revenue in the past 18 months,” said Leong. “The development of non-gaming elements would further help Macao to diversify its economy.”

Macau GDP shrank 24.2% year-on-year in the third quarter this year but the decline eased from a 26.4% drop in the second quarter. This is despite the 34.3% year-on-year decline in casino gaming revenue in Q3 2015. The revenue in three months ending September amounted to MOP 54.37 billion compared to MOP 82.86 billion in the same period last year.

However, in a report published by Union Gaming Research LLC., analysts Christopher Jones and John DeCree said that non-gaming revenue for Macau casino resorts is “simply not large enough” to offset declines in gaming spend in the city.

“While the non-gaming segment is growing as a percentage of overall revenues, the mix-shift is being fostered by a reduction in gaming win rather than a more significant acceleration in non-gaming revenue,” said Jones and DeCree.

According to data released on November 19 by the city’s Statistics and Census Service, the total non-gaming spending of visitors to Macau in the third quarter fell 19.5% year-on-year.

“In five to 10 years, non-gaming might be the primary driver of EBITDA [earnings before interest, taxation, depreciation and amortisation] in Macau given the market’s significant investment in this area; however, it is unlikely that non-gaming will significantly drive Macau earnings in the next 24 to 36 months,” said Union Gaming.

New director of the Gaming Inspection and Coordination Bureau (DICJ) Paulo Martins Chan, who was also present at the meeting, swore to step up efforts in developing gaming regulations in order further to improve Macau’s economic competitiveness. It was the first time Chan had officially met representatives of the six casino operators since his new appointment.

Tuesday’s release from GIB did not reveal the date and the location of the meeting.