Home / Poker / Confessions of a Poker Writer: Searching For The Energy 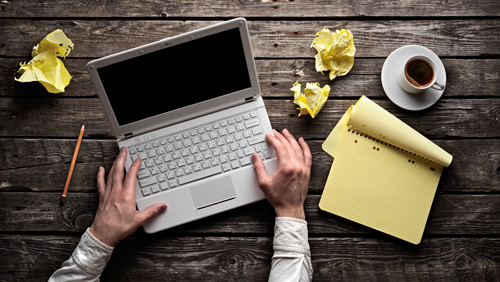 In this week’s Confessions series, Lee Davy describes the difficulties that arise from the solitude of writing and the importance of finding the energy that will transmute into one’s work.

Kidnapped water moves from side to side in the glass. It sits atop a Lynyrd Skynyrd coaster. Next to it sits a napkin. It has the words ‘Zoe-Gillings Briers‘ written on it in black pen. There is an arrow pointing to the crease. I wonder what’s beyond the crease?

I can see half of an American Express bill behind my Macbook. A list of hidden costs scribbled in blue. There are others notes: groceries, pay assistant, figure out November tithing, USANA, holidays, tax and Xmas. The sight of it sends the theme of blue into my heart. Think happy thoughts. There is a pile of old receipts waiting for someone to file them. I think that someone is me. Think happy thoughts.

Beyond the window is a grey building. Like Jack’s Beanstalk, I can’t see where it ends. It’s depressing. I can’t even see the people as they go about their nine to five. The windows are black. Their secrets are safe.

Paper covers the printer that never works. There is an old battered filing cabinet encrusted with magnets like barnacles at the bottom of a boat. There’s one from Morocco. The South African one is a picture of Nelson Mandela. It’s weight pins a postcard of San Fransisco against the blue. A Romanian magnet containing an image of Dracula stares down at a red magnet that says Keep Calm and Carry On.

Memory jars surround me. One for each year. Hanging on one of them is a sign that reads: “To the world you may be a father, but to me you are the world.” To the right of me stands an Ikea lamp and the same Ikea bin you find in everyone’s house. There is no bulb in the lamp. It’s dead. The bin is alive with a pungent and insidious smell found in a teenager’s bedroom.

Post-It Notes coat the walls like acne. Each one contains the scrawls of my dreams. Little bombs that would wake me up if I could ever get from this keyboard for five minutes to take some action. My vision board is upside down. It’s not my vision anymore. It’s waiting for me to rip it apart and start anew.

Suddenly, I am struck by the speed at which my view on the world is changing. I created that vision board less than 12-months ago. Today, it appears materialistic and worthless. It’s not who I am anymore. It depresses me.

There are two rucksacks on the bed. One is mine. The other belongs to my son. Each time I look at it I am reminded of the deepest melancholy embedded in my body’s every nook and cranny. I miss him. I always miss him. There is a £60 parking fine next to it. I was trying to be cute. I won’t try to be cute again.

There is a new book called Species in Denial. It’s a tome. There is an array of Christmas presents that I can’t afford, and a pair of Nike football boots that I ordered from some rip-off merchant in China. I thought it was a Nike store. I was rushing. I am always rushing. It will probably cost me more in postage to return them than the damn things cost. They are pink. Why do kids want to wear pink football boots?

I have three empty Abel & Cole boxes. I forgot to put them out this morning. I have developed a nice relationship with my Abel & Cole delivery boy. He wakes me up every Wednesday. I sleepwalk to the door with my morning wood poking out of my jim-jams, and we exchange boxes. He always looks at the wood. I always wonder if he wants to knock on it. Today, he didn’t knock. Now I have empty boxes everywhere.

I have not been right since I returned from Nottingham where I worked over 100 hours for the World Poker Tour (WPT). I am tiring too early. My eyes are redundant of all forms of moisture and red tributaries run wild. I look like a zombie. My right-hand aches. I imagine the onset of Carpal Tunnel. Sometimes I think it’s just age. Then I look around my room, and I want to kick a cat.

People take the piss out of writers taking up seats in Starbucks. There seems to be a snobbery about it – the divine right of kings and queens. Each of us sitting there for hours thieving electricity, sipping on a cold Chai Tea Latte that has stood there for eight hours.

“Go away little dove,” you think inside your head.

In the real world, you just shake your money maker pretending the Bose soundproof headphones have transported you to a parallel universe. You look around. Everyone looks like a spy.

I go to Starbucks to write. I also go to the library. On occasion I will jump on a train to London and write all the way there and back while being fed bananas and peppermint tea by a woman wearing antlers on her head and Christmas trees dangling from her earlobes.

It’s the people you see. They take the chill off my heart. When I am at home I stand up, walk around, take my binoculars and try and see the nine to five; I read my books aloud as if supplying my company, and nothing seems to work. My head hurts, my hand hurts and my heart hurts.

The Pokemon stickers on my desk know the score. They wink at me. They point to me. There is a dragon. He flaps his wings. He wants to fly away and create something cool from a bag of burned bones.

Get out and about. Mingle. Touch. Be touched. Talk. Listen. Write. Order a cup of tea. Buy an expensive salad. Write. Read. Stare.

I’ve heard that Ernest Hemingway was a decent writer. I am sure there were times when he was cooped up in a room reeking of the wrong kind of Feng Shui.

What did Hemingway do?

He got off his ass and went looking for the energy. He found it in the most magnificent little Parisian cafes. I can imagine him sitting there soaking in the sun, sounds and senses. And when he was ready, he would use all of that energy and pour it into his work. His face would have remained like a mask, but deep down in his gut he grinned.

And now do I as I realise that if I don’t leave this fucking room, I am never going to get anything done.

Confessions of a Poker Writer: Getting The Sack
Lee Davy
8 January 2016

Confessions of a Poker Writer: The Library
Lee Davy
26 November 2015

Confessions of a Poker Writer: A Night With Marianne Williamson and Theodor Adorno
Lee Davy
19 November 2015
.