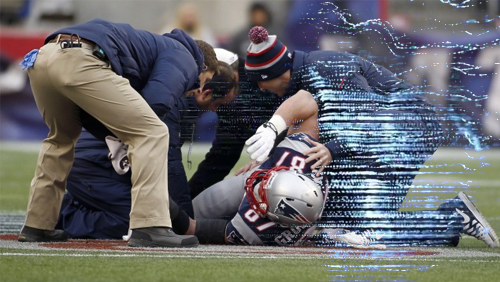 The injury to Rob Gronkowski is a big deal for the New England Patriots. That goes without saying. He’s the second best player on the team, even when they’re at full strength. Hell, he’s the best tight end to ever play the game. But even a temporary absence by the man known as Gronk is not a death sentence for the defending champions.

As long as the Patriots have Tom Brady, everything’s going to be fine. I should probably preface this be explicitly stating that I am not a Pats fan. More than anything, I’m a gambler and a football fan (probably in that order).

You can’t replace Gronkowski, but you can certainly evolve in reaction to his injury. I’m not here to discuss x’s and o’s. You just have to look at the history of the Patriots in the Belichik era. They’ve gone from dink-and-dunk, to steamrolling the football with a clock killer, to bombing it out with Moss and back to dinking it…all under the watchful eye of Tom Brady.

In other words, the Patriots have been masterful at adapting to the circumstances of their team because Brady is the truest sense of a transcendent quarterback. He makes everyone around him better.

Besides, adapting to injury has been the theme of the season. We’ve lost too many superstars than I can bear to think of. And have any of the teams missed a beat?

Let me check…Le’Veon Bell is gone and Pittsburgh still looks the same…Jamaal Charles got replaced pretty handedly by Charcandrick West and Spencer ware, and now Kansas is back in the playoff hunt…Seattle lost Marshawn Lynch and somehow stumbled in to Thomas Rawls…Peyton Manning’s limbs fell off and Brock Osweiller’s on a two game win streak…yup looks like most teams know how to do get over this injury thing.

This season has been virtually apocalyptic on the critical, and season ending, injury front, and it all began before we started playing meaningful games. The Carolina Panthers lost Kelvin Benjamin, and Green Bay had to send Jordy Nelson to the injury reserve. Everyone giggled and pointed at the truly awful set of wide receivers that Cam Newton had to suffer with, while lauding the seemingly transcendent talents of Aaron Rodgers.

The Green Bay offence is a steaming pile of dog shit. There’s no rosy way to put it. In fact, Green Bay’s offensive rankings are the worst they’ve endured in the past five seasons since Nelson became an All-Pro caliber talent in 2010. The Packers were even able to maintain a hefty scoring spree in 2013 when Aaron Rodgers played just nine games. Look at the rankings of Green Bay compared to New England over the years:

The difference between these two franchises is enormous when it comes to consistency. At no point have the Patriots been less than a top-4 offence in the NFL. Even in 2013 when Gronkowski suited up for just seven games, the Patriots where able to drop the second most points in the league.

Can Jordy Nelson really be that big of a difference? You could’ve argued heading in to 2015 that Nelson or Antonio Brown were the top receivers in the game today. Gronkowski’s probably in that mix too. But other quarterbacks and teams have lost their star players and maintained pace. Again, look at the numbers above and comb through the rosters for the Patriots each and every year. It’s always a different set of skill players.

This is an argument as to why Aaron Rodgers isn’t a transcendent quarterback. Brady has made everyone he’s ever played with a superstar and a household name. You simply can’t say the same about Rodgers when it comes to anyone excluding Nelson.

His numbers are grotesque this season. Rodgers ranks 15th amongst quarterbacks in passing yards. Kirk Cousins and an injured Joe Flacco are ahead of him. So is Russell Wilson. It’s bad, and you can make up all sorts of excuses with Jordy’s absence, but Rodgers is a one-time MVP of the league. He’s supposed to get over things like this.

Also, this is a great time to mention that JORDY NELSON WAS HURT THREE FREAKING MONTHS AGO. How have the Packers not adjusted to his absence? He was in the hospital and on crutches before we ended the preseason.

Green Bay’s offensive metrics have gotten worse as the season has plodded along. One of the leading stats you should use when measuring a team’s offensive efficiency is first and third downs. It’s a metric for how well a team moves up and down the field at their own discretion. Arizona has 259 first downs this season, while New England has 257. They are the top offences in the league right now. New Orleans, Atlanta and San Diego round out the top-5 in total first downs and all of them are ranked 6th or higher in total yards gained.

Green Bay has plummeted down the inefficiency tree and hit every branch on the way down.  They’ve managed just 216 first downs so far ranking them 19th in this category. They’ve also converted just 49-of-137 third down attempts, which is a mark that puts them 27th in the NFL.

The deeper you shovel, the more you realize that everything Rodgers is doing is at a mediocre level. Even his most loyal supporters have to admit that. Numbers are like Shakira’s hips – they do not lie.

This is a league where you adapt or die. Carolina is the only other NFC contender that lost a player of Nelson’s magnitude when Kelvin Benjamin tore his ACL. Instead of being conceited enough to believe that they could just go about doing the same old thing, Carolina went back to doing what they’ve always done best – pound the damn football.

The Panthers ranked 19th in passing yards in 2014, which was way up from 29th the year before. With Benjamin gone, and the roster of receivers being well below average again, the Panthers have dropped back down to 29th in terms of passing yards per game.

The insane part is that Carolina has shifted from scoring around 26 points per game (good enough for 18th and 19th in the past two season) to averaging a whopping 30.2 points per game, which has them as the third best scoring team in the league.

I mean, if you want to talk about transcendent quarterbacks, look no further than Cam Newton. Maybe those bastards on the Denver Broncos should be flying around at his knees instead.

So why can’t Green Bay, a team with a great coach and an MVP quarterback, find a way to win in the same way that Carolina can? It’s dumbfounding. Sure, some if is the defense’s fault, but Green Bay has always relied on having nuclear-level offensive firepower. Nelson can’t be that big of a difference. Not when so many other teams are figuring out ways to replace fallen comrades.

It may sound like I’m beating on a crippled horse here by slamming the Green Bay Packers and Aaron Rodgers when they’re mired in a four-loss season, but I’m not. More so, I’m pissed off about it. I’m frustrated that a man as talented as Rodgers isn’t making his team better or proving his naysayers wrong. For the brunt of his career, he’s always had a great offence around him and now that he doesn’t the scabs are starting to peel in a messy, pussy way. 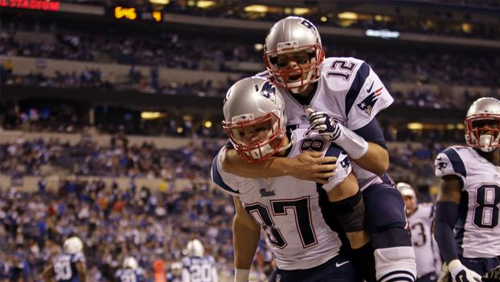 Turn the page to Brady, and the majority of the media is screaming bloody Mary about the loss of Gronkowski. You already know how I feel about Gronk. He’s irreplaceable. But he’s not the real guy that makes the Patriots tick. Brady has turned Joe’s in to heroes and given new life to living legends.

Do you think we’d have heard about Julian Edelman if not for Brady slinging him the ball? Do Randy Moss or Corey Dillon go anywhere else in the twilight of their careers and succeed like they never had prior to arriving in New England? Moss had his best season as a Patriot in 2007. Dillon scored 45 rushing touchdowns in seven seasons for the Bengals. In New England, he racked up 37 in just three years.

I’ll say it again: some teams know how to adapt and others are too stupid to figure out how to find other ways to win. At its worst, it’s idiotic. At its best? Arrogant.

Already, the public is reacting to New England’s game against Philadelphia like nothing’s happened to their star players. That’s probably more so because of Philadelphia capsizing down the stretch than anything else. Nearly two-thirds of the action is prefacing New England even as -10.5 point favorites.

Carolina also has a layup this weekend against New Orleans, and are -7.5 road favorites against the league’s worst defense. They’re also generating two-thirds of the action already.

Yet somehow, the public is still falling for Aaron Rodgers and the Green Bay Packers as they head to Detroit with a -3.0 handicap. This is the same team that’s gone just 1-4 SU and ATS in their last 5 games, with losses to Chicago and – oh yeah – Detroit!

At some point you have to know when to pull the trigger on a dying mule. Everyone wants to believe that Rodgers is this transcendent god of a quarterback. He might be, but this season we haven’t seen any evidence of it. Blame the coaches. Blame Davanta Freeman and Randall Cobb if you want to. Blame Eddie Lacy for getting fatter. It doesn’t matter. Everything in football begins and ends with the quarterback. That’s why they make the most money.

Coincidentally, the Packers and Panthers both have the 9th most difficult remaining schedule amongst all teams. All I know for sure is that one team has figured out how to maximize their available talent, while the other is twisting away as the toilet flushes.

By the way, the Patriots have the 26th weakest remaining strength of schedule with matchups against the Eagles, Texans, Titans, Jets and Dolphins left. With the perfect season gone, they will likely go in to cruise control as they enter the playoffs as one of the top two seeds. There is no cause for concern either. With or without Edelman, Gronk, Amendola or Lewis, the most important cog in the engine is still revving as usual.

As they say in and around Foxboro, just keep calm and Brady on.

*Odds for this article were provided by Oddshark