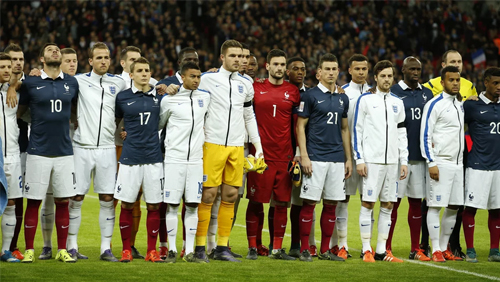 The sporting world once again shows its incredible capacity to unite with an enthusiastic turnout at Wembley for the England v France football international.

Tuesday night’s international between England and France was a night drenched in emotion. Had it not been for the swish of the helicopter blades it would have been the quietest minute’s silence in history. Hailed as a great display of Anglo-French solidarity. I believe it was the world in union.

The match took place four days after the Parisian atrocities. People are still fighting for their lives in hospital. Many people thought they should have cancelled this game. It was too soon. It was a friendly. People needed time to mourn.

They needed to play this game. It’s a statement that life goes on. This is the not so brave new world. By playing that game, we were making a bold statement to the terrorists. The game goes on.

The red white and blue arch hanging high over Wembley, the cameras invading the faces of the French, and the rapturous singing of the two countries national anthems. There is something soul stirring about a great sporting event.`

Before the game began, questions were asked if the French were capable of hosting the European Championships next summer. It was a ridiculous question. The attacks in Paris can happen anywhere in the world. Nobody will quell this madness.

The world is at war.

Two trenches and a no man’s land in between. War used to be brutally simplistic. Today, planes are hijacked and flown into buildings; subway trains explode, and people are shot dead inside pop concerts.

The whole world is a  battleground.

The sporting world needs to be on high alert. There are many reasons for a sporting venue to be a high profile target for a terrorist organization. Stadia fuelled by emotion. So much national pride. Men, women and children, all packed into the same space. The world is watching. Celebrities are running around on pitches earning more money in a day than some of us make in a year.

I was in my apartment, in Cardiff, writing an article. There was an explosion the likes of which I had never heard before. The room filled with fear.

“Turn out the lights.” I said.

We crept behind our sofa and peered out into the darkness of Cardiff. Across the way, there was a hospital. At least 20 men poured onto the roof carrying rifles.

“What the fuck is going on?” Said my wife.

My wife called the police.

It was a training exercise.

In that moment I realized that had that been a real threat I would not have been able to protect my family. I would have been helpless. All I could do was to hope and pray that my apartment was not on their list of potential targets.

It was easy to write in my gratitude journal that night.

There is nothing we can do except remains vigilant, pray and be grateful that despite these rare incursions into the heart of our homes, there are people who hear the bombs and the swish of the helicopter blade on a daily basis.

For them, there is never a minute’s silence.

They don’t even get a second.

US casinos enjoyed record revenue of $43.6b in 2019’s pre-pandemic paradise
Steven Stradbrooke
4 hours Ago