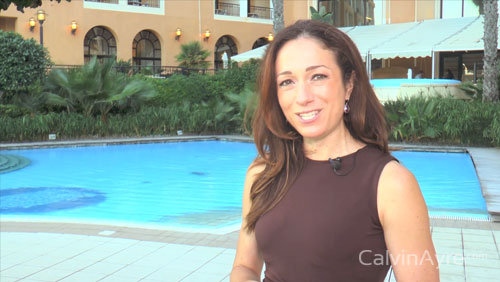 The seventh annual Malta iGaming Seminar (MiGS) kicked off today with a bang at the beautiful Corinthia Hotel in St. George’s Bay.  Several hundred senior level professionals gathered at the conference today, some local and others coming in from the UK and other parts of Europe, the US and South Africa.

Today’s session highlight was the “A Century in iGaming” panel featuring industry veterans Sue Schneider, Paris Smith, Mark Blandford, Franz Wohlfarht, Pontus Lindwall and our very own Calvin Ayre.  The discussion revolved around biggest challenges, best decisions ever made, what could have been done differently, innovation and predictions.

Both Ayre and Blandford saw eye to eye on several issues including overregulation and also the importance of iGaming technology and the impact Blockchain technology will have on our future.

Ayre said he believes the iGaming industry is overregulated and Blandford said regulators are excessive on the demands they put on operators.  “They simply don’t understand the nuts and bolts of our operation”, Blandford said.

Smith added the sportsbetting side of the industry has traditionally been more self-regulated but has always welcomed regulation that makes business sense.  She said Pinnacle tries to look at frustrations as opportunities, “be creative and innovative to find your way out of it”, she said.

When asked what was the best decision he’s ever made, Ayre said it was avoiding the rush to go public as Party Gaming and SportingBet chose to do, for example. He cited Bet365, Pinnacle and Playtech (the operator side) as companies that remained private and have enjoyed a great deal of success because of it.  “[Going public] comes along with a lot of baggage.  Best decision I ever made”, he said.

Lindwall said his best decision was going for “niche” markets such as the Nordics when most other companies were going for big market such as UK and the US.

On the subject of entering new markets, Smith emphasized the importance of understanding different markets before entering them.  “Just because it works in America doesn’t mean it will work elsewhere”, she said.

When asked what they would have done differently, Ayre said he would have invested in more tech and it’s ironic considering he started off as a software developer but got off-target with promotions.  “Its really all about the technology”, he said.  Blandford agreed and emphasized the importance of actually controlling your technology.

The panel spent a good chuck of time discussing innovation and Ayre said “the industry has not been quite as innovative as it could have been” and most companies have been simply copying 100+ year old games and re-distributing them by internet.

However, times are changing.

“eSports & virtual reality will fundamentally shift everything.  I think there are some exciting things coming”, Ayre said.  “Innovations like Blockchain are going to revolutionize things”, Blandford said.

Ayre agreed innovations like cypto-currencies are game changing but emphasized the importance of tokens to trust less blockchains.  He made another point and said “technology is going towards the direction of returning power back to consumers”, the emergence of crypto-currencies as a perfect example of how.

Later in the day, Julian Borg-Barthet of NMi appeared as a speaker in the “Increasing Cost of Doing Business” panel.  He said regulators invite testing labs such as NMi to come in and share opinions, provide feedback and talk about new technologies, potentially a way to shape smoother regulations in the future for operators.  “Its about getting together, if [our industry] has a unified voice, people will listen to you”, he said.

At this evening’s networking drinks, day one conference chair AJ Thompson told CalvinAyre.com how MiGS has evolved over the seven years its been in existence.  He said the event started off as a pool party and has grown into one of the most content-driven events of the year.  He said this year there is a big focus on regulation and regulators are now coming to MiGS from other jurisdictions to talk about best practices.

Thompson also recapped the healthy networking schedule the MiGS organizers have prepared for delegates and commented on the appropriate and unique mix of work and pleasure the event has to offer.