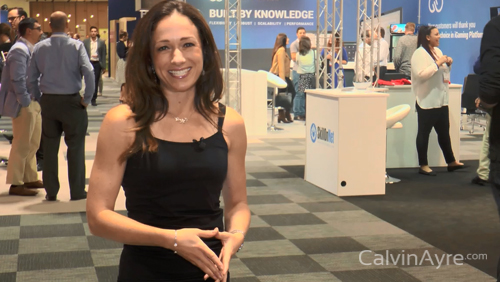 The second day of SiGMA got off to a slower start than day one, a clear sign delegates were able to find some good fun the evening before. Come 2pm the expo hall picked up again and the buzz returned for yet another day of deal making and networking.

Today we spent the majority of the day visiting the many booths on display, everything from affiliate programs to regulators, software providers and other suppliers.

The Frosmo booth caught our eye being a company fairly new to the iGaming industry and one that we had not spoken to before. Robson Lindberg, Sales Manager for Malta and the UK, explained how Frosmo’s technology can cut an operator’s development costs to a tenth and increase revenues. Using javascript, Frosmo allows operators to perform any kind of modifications in the customer’s browser without the need to affect the backend, an easy way to make the user experience more personalized.

Lindberg told CalvinAyre.com the reaction to his product at SiGMA was overwhelmingly positive and the conference served as a great venue for making more contacts in the online gambling industry.

We also stopped by the iGaming Cloud booth and spent some time with Roger Admeus, Head of Sales and Marketing. iGaming Cloud is an innovative iGaming Platform built by experts with extensive iGaming experience. Some of the features the platform provides include a flexible bonus system, real-time data and custom reporting, a seamless wallet, multi-currency payment processing and more.

Similar to Lindberg, Admeus praised the SiGMA organizers for putting together an event facilitating intros and meetings, a success for iGaming Cloud as far as Admeus is concerned.

All-in Translations made a big splash today with the reveal of their “iGaming Thrones” short movie, filmed here in Malta just days before and featuring some familiar iGaming industry faces.

CEO and Founder Roy Rulator told CalvinAyre.com he plans to create short movies at each conference All-in Translations attends, all featuring his staff and other industry friends. He said its important to have a little fun while doing business and he was delighted with the turn-out at SiGMA for the reveal.

We were also able to catch up with one of yesterday’s speakers, email marketing expert Michael Finderup of Power Media Group. Finderup shared his best tips for affiliates on how to make the most of their email marketing, everything from the importance of collecting data and segmenting lists to advice on ESPs, how to time email blasts around paydays and the importance of negotiating a good mix between CPA, revenue share and CPC in order to stabilize commissions.

Before closing out for the day, we caught up with Eman Pulis, one of the main men behind SiGMA. Pulis described how the event has matured from its “baptism of fire” last year and pointed out how the exhibitors have come back with more elaborate booths this year. He also mentioned the growth of exhibitors and delegates from outside of Malta in comparison to last year, including representation from countries such as India, America and other parts of Europe.

Pulis also made a point to mention the success of SiGMA’s networking events and promised tonight’s official SiGMA party will blow last year’s out of the water. Plans are already underway for SiGMA 2016 and seeing as the feedback Pulis has received so far has been positive, we’re all looking forward to an even bigger and better event next year.