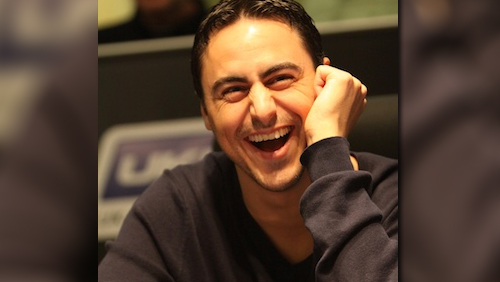 You won’t find a dog hair on him.

Slicked back hair, Fred Perry top; I can picture him chewing the fat with Brick Top over the best way to feed a man to a pig. He has that Cockney Guy Ritchie casting couch look about him.

Allen is one of poker’s nice guys. He is a family man who has spent the past decade balancing his life as a professional poker player with life as a huggable husband, and a doting Dad. Not an easy job, but one that Allen seems to relish.

*This is an abridged version of the audio.

Who is Kevin Allen?

“I come from a footballing background. All my life I thought I was going to be a professional footballer. I was kind of talented but not talented enough to make it in this day and age.

“I left school, didn’t want to go to college. I got a job in insurance, but I couldn’t handle the nine to five. I couldn’t stand it. Every day I was late; running down the road with a loose tie around my neck. It was ridiculous.

“If you were to go on the fruit machine after me you would never win. You would stick £80 in to win a £25 jackpot and get nowhere. When you knew the machine was ready you would put £2-3 in and if the sequence was ready to pay out you played it.”

But you had to know that sequence right?

“Not really, I worked some of them out myself.”

“You spot patterns and tendencies, and I would notice things. For example, when you put a pound in, when it wasn’t full, it would go into the tube, and when it was full, it would drop down the back. You would know it was full up. It had money in it. We called this ‘dropping’.

“I lived by Romford Greyhounds. I used to get the lot there. Then I met a bloke at a service station. We got talking, and I went up to the next level. I had a week off work and made more than I would have made in a month. So I was done. I was going to quit work.

“My Dad told me to go for it, and my Mum said no. I went for it. By this time, I stopped going into pubs because it was a little bit naughty and I didn’t want landlords to think I was sharking them. Then they put the roulette machines into the betting shops, so I had to look for something else, and that’s when I found poker.

“Everyone says, ‘Devilfish this and that,’ but he was the reason I got into poker. I was bang into the Late Night Poker scene. It would come on TV with all the smoke and that and I was mesmerised. This bloke was just beating everyone up. Back then he was so ahead of the game it was embarrassing.

“I started playing fixed limit poker in a browser then I found Ladbrokes Poker. Patrik Antonius was playing on there. He was ‘I_Knockout_U’ and he used to be sat there with a chunk of chips. I used to think, ‘who is that guy?’

I believe your uncle if former Tottenham footballer Paul Allen?

“My Dad said he had the best work ethic ever. He was dedicated and talented. When he told me things like that, I understood to be at the elite level of your profession you need that dedication. When I play tournaments I don’t drink alcohol, I try and focus, keep fresh and fit. Everyone thinks you can turn up play a bit of poker and go, but it’s a mind game.”

Is poker your only source of income?

“It is. My girlfriend hasn’t worked for 12-years. I have three children. That’s the hardest bit. I can’t travel to all of these EPTs to play. My family comes first. I have a 13-year old daughter a boy turning 12 and my youngest is five.

What’s the toughest thing about being a parent?

“Missing them when you are away. I love it. That’s why I spend so much time at home. It kills me when I go to Vegas. But they know that’s where we get the money. Actually, I have done it in during the last three years in Vegas.

“With regards to being a father I have told all of my friends that when you turn into a father and you will understand what life is all about. Everything about it amazes me. The way they develop, grow up and how when they go off track you can help them get back in line.”

Is your girlfriend in the poker industry?

“She knows what an ace is. She has been amazing. If you get a girlfriend who doesn’t understand your profession, you are going to have to get a new girlfriend. I know a few friends who are out of the game because their girlfriends have drifted them out of poker.

“If they see it as gambling and seedy, and I can see that, it can be a nasty game, and you hear a lot of rumours. But my girlfriend doesn’t go to work because I play poker. If we have a downswing, we pull in the reigns. Instead of having a luxury holiday we go to Butlins.

“I don’t waste money on gambling, and I don’t blow my money. I know how to live life, but I treat my family well. My children come first. I would love to travel everywhere, but I get more of a buzz out of family life. It’s priceless to me.”

What makes you nervous?

“Not a lot, I respond well to pressure. It’s how you respond. If you are playing for big money, you can’t get phased, and that’s what makes you good at your profession. A lot of it comes from my background in football.

“I used to spend a lot of time in the soccer schools with Martin Allen, who is the manager of Barnet. He taught me a few things about life. He was such a generous man. He would have us stay around his house, buy us KFC and we would have pillow fights. We would have such a great time. Look at me I am still speaking about it today, 25-years later. I don’t get nervous. I just respond and love life.”

Can you remember a time when you was intimidated?

“When I got onto the Poker Million about six years ago, they interviewed me, and I said it would have been special to get Devilfish heads-up. I would have been in awe of him.

“The first time I played with Ivey in Vegas, he sat in, and you see all the eyes coming over. He was a character at the table, showing us his big bets and messing around. There was an aura about him. The first time he sat down, and was on my immediate left, I was intimidated.”

“Football is my life. It’s not even close for me. I am a Tottenham fan, but I am one of those lads who will support any team. I take my son to West Ham and sing the bubbles song. I am running my son’s football team at the moment. I didn’t make it as a pro footballer, so I want to give my son every possible opportunity to do so. I have just got him a speed coach to help him in that department. Football for me.

Give my teenage son some advice.

“You want them to develop and be their own person, but you have to teach them the right way of living as well. They need to know right from wrong. They need to carry themselves well, open doors for people, things like that. Treat others in the way they want to be treated.”