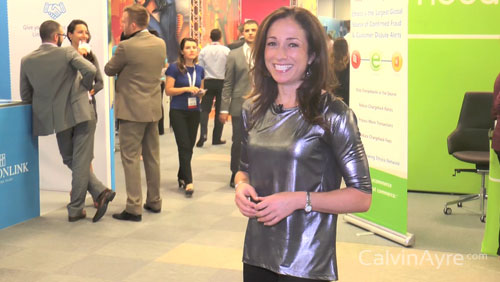 The first day of SiGMA 2015 has kicked off at Malta’s Intercontinental hotel, returning to the same venue for the second year in a row.  A few things have been adjusted this year from last, one being a larger expo floor, two being sessions taking place in a more intimate room adjacent to the expo hall and three, more attendees.

SiGMA’s vibe has maintained its fun feel with delegates letting their hair down from 3pm or so, indulging in free bars and lively music, resulting in a networking party atmosphere.  While the expo hall felt busy all day, for sure the crowd thickened in the afternoon and remained that way until well after the exhibit hall officially closed.

Casumo’s booth enjoyed a large crowd this AM with delegates lining up for complimentary plates of sushi. Casumo Affiliate Manager Christian Ferreri said he wanted to create a “welcoming” atmosphere at the booth and designed a space similar to a living room to make affiliates feel comfortable.

In addition to making a splash at their booth, Casumo invited their top 20 or so affiliates to join them the day before SiGMA for a little VIP treatment.

The adventure began with breakfast at the Hilton hotel followed by a speedboat ride to the Baia Beach club for an afternoon full of activities, food and drink.  After a few hours of recovery, the group was picked up at the Intercontinental hotel by a fleet of vintage cars and delivered to the Villa Rosa for an exquisite meal.  Live music and a comedian entertained the group throughout the dinner and each VIP was given a buy-in to the official SiGMA poker tournament.

Every single affiliate who attended the VIP event raved about Casumo’s unique gamified casino product, the professionalism of the team and how much they appreciated the special treatment.

The Maltese government has a presence at SiGMA and greatly appreciates the spotlight an event such as SiGMA places on the lucrative and booming online gambling industry on the island.

The Honorable Herrera, Malta’s Secretary of Competitiveness and Economic Growth, was delighted with the growth of SiGMA since last year and praised the organizers for their hard work.  He elaborated on Malta’s efforts to attract operators who are targeting geographical regions beyond Europe, namely South America and Asia.  The favorable tax structure, the many years of experience in the industry and the lifestyle Malta has to offer were all reasons why Herrera believes iGaming will continue to thrive and grow on island.

Running alongside the bustling expo hall today were several conference tracks, this morning’s focusing on Gamification and this afternoon’s focusing on Affiliates and SEO.

Frank Ravanelli, an independent affiliate manager focusing on Binary and DFS, spoke mainly on DFS in America and Europe.  He said there is still opportunity for affiliates and US-facing DFS regardless of the regulatory and legality uncertainty sweeping across the US at the moment.  He advised such affiliates to work on a CPA instead of revenue share as it’s a risky market, but also a big one so they should reap the rewards while they can.

Ravenelli said there are opportunities for affiliates to promote DFS to a European audience, but the way in which they do so should differ from how US-facing DFS sites are promoted.  American DFS players are interested in lots of data and want to learn how to make informed decisions while European DFS players are casual and are more interested in hearing about the different football clubs and other lighter bits of information.

Super affiliate Erik Bergman of Catena Media spoke on the “Emerging Trends for Big Affiliates” panel and shared some of his thoughts on the M&A we’re seeing in the affiliate industry today. Quite a bit of consolidation is happening in Scandinavia, but extends beyond this geographical region, Bergman explained.

When asked what impact all this consolidation will have on our industry, Bergman said he anticipates there will be four or five big players emerging in the future and they will deliver 80% of the traffic, but the remaining 20% will be delivered by smaller players, so there will still be room for them.  He used the example of the dominance of global pizza chains such as Pizza Hut and Dominos but how we still continue to see one-off pizza shops on every corner.

After the expo hall closed down today, delegates moved over to Tapaz for official conference drinks and a party at Hugo’s Terrace for what we are sure will be yet another night of networking and good times for SiGMA delegates.