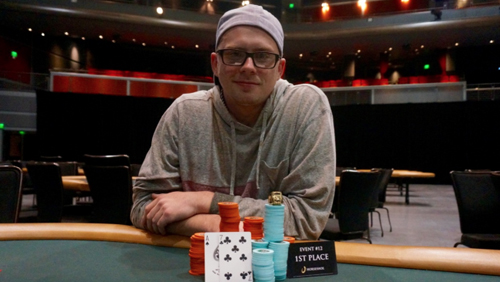 Zachery Schneider has won the World Series of Poker Circuit High Roller event at Horseshoe Hammond for a top prize of $101,250.

It’s the first time the World Series of Poker (WSOP) has held a High Roller format on the circuit. It attracted 54-entrants and a $270,000 prize pool. Schneider – a pre-Black Friday professional online poker player – went wire-to-wire as the tournament chip leader to claim the $101,250 first prize.

You have to go back to July 2012 to pick apart Schneider’s biggest tournament win before this one – he topped a field of 149 entrants in the Wynn Summer Classic for $12,032. He worked hard for it. There were gems hidden amongst the final six.

Duong won the $1,500 Bounty Event this summer for $333,351. It was his third WSOP final table appearance including a visit to the final table of the Little One for One Drop. It was his fourth WSOPC Final Table, and he is still searching for his first win after finishing sixth.

Two-time WSOPC gold ring winner Aditya Prasetyo is another talented player with experience at the sharper end of things. It was his ninth WSOPC final table appearance, and he has also featured in two WSOP Main Event final tables including a sixth place finish at the record-breaking Colossus. Prasetyo finished fifth.

On paper, the two players who were likely to give Schneider the most trouble finished second and third.

Matthew Shepsky also came to the final table in excellent form. He won the WSOPC Summer Warm Up Main Event in this same casino back in August for $47,200, and then went on to win the Heartland Poker Tour (HPT) Main Event in Black Hawk for $227,864 one month later. Shepsky would finish third.

Schneider would enter heads-up trailing Brandon Fish in the chips counts. Fish came into this event on the back of an excellent run of form. The WSOPC gold ring winner finished runner-up to Lance Garcia in Event #7: $1,125 NLHE for $24,575 and won the RUNGOOD Poker Series in Council Bluffs for $34,267.

Schneider managed to overcome that chip deficit by doubling up with queens against nines. After that, the pair butted heads for a further three hours until the A7 of Schneider toppled the QJ of Fish to deny him a second gold ring and drag one onto his finger for the very first time.

The WSOPC spreads its tentacles a little wider for the next few months. Harvey’s Lake Tahoe will host a festival Nov 6-9, and the Kings Casino in Rozvadov, Czech Republic will also host an event Oct 29 – Nov 9.