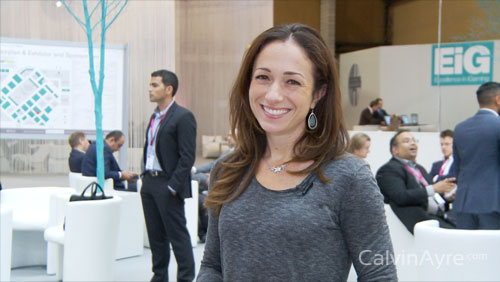 Day two of EiG was a success, with the expo floor just as busy as day one, but today the focus for CalvinAyre.com was on the sessions.

Over at the Think 2025 track there was a big focus on disruptive technology today, including topics such as virtual reality, augmented reality, enhanced ad blocking, wearable tech, and more.

“Outside-in” speaker John Straw, entrepreneur, author of iDisruptive and VC, talked on “the corporate disruption challenge” and “the five pillars of disruption”.  These five pillars are:

1)Artificial Intelligence/Big data:  AI is now able to identify what’s happening in a video, can be used for personalized learning and digital PAs.

2)3D printing/Materials Science; At the moment we’re only capable of printing plastic, but this is changing- expect a new generation of personalized products.

3)Advanced Robotics: Robots can now learn and complete tasks such as tie balloons and open boxes with box cutters.

4)Virtual Reality: There are a lot of companies moving into this space, Google has moved in, Microsoft HoloLens, Facebook and Oculus.  Apple is set to enter the market soon and rumor has it the iPhone 7 will have 3D icons you can flick against the wall to see.  Look out for new opportunities for advertisement in VR.

5)Disruptive marketing: iOS 9 brought the end of advertising as we know it, a “real kick in the teeth for Google” and they will now have to focus on video.

“Lots is going to happen in the next 5 years”, Straw said.

“[VR] changes everything”, he said.  “As a gaming company, putting money into VR now is a smart investment- you won’t get return for two or three years, but its worth it”.

In response to how iGaming companies can deal with ad blocking, Straw said the creation of compelling content is the way forward as opposed to traditional advertising and once again mentioned the new opportunities to be uncovered by Google with video.

All panelists agreed mobile strategy and personalization is of upmost importance.   Clancy said “its all about mobile” and the focus of “delivering content to the right place at the right time” are main focuses for Paddy Power.

Nieboer added, “We see things as a personal and portable betting approach- as things get smaller, operators have to get smarter about providing the correct content and personal experience”.

Nieboer went on to explain customers don’t want more than a few clicks on a device such as the Apple watch, so the onus is on the operators to spend time in R&D teams and use real time, Big Data to figure out what kind of content to provide.  “Link small devices with Big Data”, he said.

For example, William Hill is looking into bet recommendations based on live data, with the intent of delivering something to customers in real time based on real market activity.  This type of content a customer can receive on their Apple watch and swipe to the left or the right if they like it or not, akin to what we are seeing on dating apps such as Tinder.

Today’s “eSports- what competitive gaming can tell us about the future of player engagement” presentation by Jens Hilgers of ESL was well attended and well delivered.

Hilgers has been in the eSports world since 1998 and is clearly passionate about the sector, sports that he believes are bigger, more meaningful and better than traditional sports.  Here are his four reasons why:

2)eSPorts games have significantly higher strategic depth and are therefore a more sophisticated story to tell.  Millennials want to be entertained by depth.

3)Video games are highly accessible making it a highly participative sport- its hard to find a field to play soccer on every day.  A sport is more exciting if you can do it yourself.

4)Transparent- the community and players shape the game and final experience and have a strong voice as well as contribution- its a transparent sport that serves its customers.

“eSports is really the sport of the young generation”, Hilgers added.

When it comes to the future of eSports, Hilgers predicted they are going to traditional TV and in turn opening up the doors for sponsorship acceptance, filling more stadiums more often, touch becoming an eSports platform and VR to bring another level of disruption to the sector.

Before closing out for the day, we caught up with Jonas Odman, the Father of the Recreational Poker Model and also the CEO of Northern Shift, a Stockholm-based poker software company that’s set up to conquer the rest of the online poker world.

Odman originally revealed his disruptive poker technology at EiG 2009 and six years later is happy to report the success of the model and the launch of his new organization.

Odman also revealed to CalvinAyre.com he is now hiring for good marketing people, country managers, payment experts, top developers and network IT talent, so if you’re interested or know someone who’s interested, let us know and we’ll put you in touch.