Are you a sports betting expert who wants to share an opinion on a game? Contact [email protected] for more details. 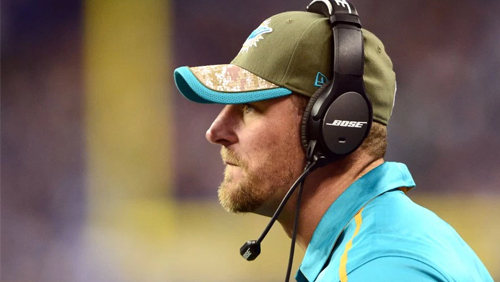 Unless you have been living under a rock, you are aware of the big shakeup surrounding the Miami Dolphins. And the question has to be raised with regard to what kind of an effect the changes are going to have on this squad going into their matchup against the Tennessee Titans (1 PM ET in Nashville), who despite their 1-3 record, have played surprisingly well for a squad that won just two games last year and is starting a raw rookie at quarterback.

Football bettors are hearing the ugly stories that have come out of Miami, which detailed the lack of control Joe Philbin had over his locker room, and the contentious relationship between the scout team and QB Ryan Tannehill, who reportedly threw a hissy fit whenever he got picked off in practice.

Philbin was said to be walking on egg shells entering the season, and he got his ouster after a drab 27-14 loss to the New York Jets in London. The bye week was conveniently upon them, and to the surprise of some, tight ends coach Dan Campbell, a former NFL player, was named to replace Philbin on an interim basis.

In the football betting odds that have been placed on this game, the Titans are a small favorite at home:

Campbell has designs on keeping the job, and he made no bones about the fact that this team was going through the motions during workouts – a state of affairs that was going to change drastically and quickly. He even went to the Oklahoma drill, something that almost all NFL coaches stay away from during the regular season, because of its physical nature and the injuries it could potentially cause.

Campbell is clearly throwing caution to the winds, and wants to get a lot of the “poison” out of this team’s system. Consequently, part of that also involved the sacking of defensive coordinator Kevin Coyle, who didn’t have the respect of many players, a situation that did not restrict itself to this season only. We’re not sure his departure solves everything; it was interesting that Jim Schwartz was reportedly offered the opportunity to be the coordinator but turned it down flat, even though he’s had a relationship with Ndomukong Suh from their days together in Detroit. Then again, maybe it was BECAUSE of that past association.

The question that should perhaps be asked at this point is whether Campbell himself is going to get the respect of this team. He is 39 years old, making him the youngest head coach in the league. And just five years ago, he was an intern. A lot of teams that have embraced a culture of going through the motions don’t easily transition to something a lot more intense.

The Titans’ transformation is in full bloom. This team was 27th in the league in points allowed last season; so far this year they are third. Under the leadership of the Hall of Famer, defensive coordinator Dick LeBeau, they have yielded fewer yards and plays per drive than any team in the league, and have forced teams into a three-and-out 37.2% of the time. That is better than one would normally expect out of a 1-3 team. So they could easily be 3-1. The offense will struggle from time to time with Marcus Mariota running the show, but he is more mature than a “normal” rookie.

There are times when the insertion of a new coach brings some immediate energy into a team. If you believe strongly in something like that, you may want to consider the Dolphins. We’ll stick with some fundamental principles, with the Titans making it kind of difficult for Miami’s slumping offense to gain ground.  If the Dolphins muster up the intensity to win this, it will be on the defensive side. That directs us toward a low-scoring game, which they have done in eight of their last 12 on the road.

Charles Jay is a gaming professional, content specialist and sports handicapper. For more of his NFL betting opinions, please visit his handicapping website, Plays By Jay, at http://playsbyjay.com