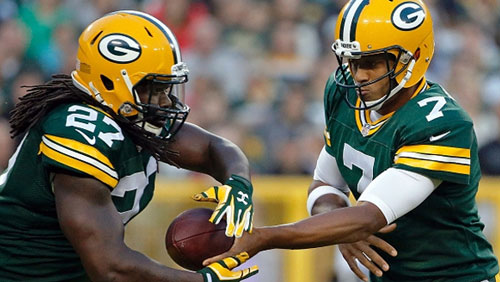 Six teams (New England has a bye) head into Week 4 of the NFL schedule looking to remain undefeated and the odds makers expect all of them to do so. The Bengals, Broncos, Packers, Panthers, Falcons and Cardinals are favored by an average of almost six points and four of them are getting over 80-percent of the spread betting share. That makes it a big weekend for them and, potentially, for bookmakers as well. The house was hammered last week with a number of heavily backed favorites bringing it home for the public. The stage is set for a redo, but clubs like Kansas City, Minnesota, St. Louis and Tampa Bay could piss on that parade. And books everywhere are hoping they do.

Baltimore Ravens at Pittsburgh Steelers (+3, Over/Under 43.5, 65% backing Ravens ATS): These two bitter rivals kick start the Week 4 slate tonight, but something about this matchup is not quite the same with Terrell Suggs and Ben Roethlisberger both being sidelined. It is, nonetheless, a game of tremendous importance for the Ravens, who are on the verge of a back breaking 0-4 start. Pittsburgh has played as a home underdog just twice in this series since the 1999 season. It lost both of those games straight up while going 0-1-1 against the spread.

Oakland Raiders at Chicago Bears (+3, Over/Under 44.5, 80% backing Raiders ATS): Are these your father’s Raiders? Maybe, but we may or may not find out on Sunday. A win over the Bears, who are already shedding players after an 0-3 start, won’t tell us much; however, a loss would provide a little clarity. While is it perfectly reasonable for Oakland fans to get excited over what looks like an impressive young core, its wins have come against the Ravens and Browns, two teams that are a collective 1-5 on the season. This weekend marks just the second time the Raiders have been lined as a road favorite in almost 10 years.

New York Jets at Miami Dolphins (+1, Over/Under 41, 68% backing Jets ATS): The Dolphins are a team many felt would contend for a playoff spot this season, but through three games they are 1-2 and -23 in point differential. Conversely, the Jets are 2-1 and looking like a potential postseason contender. Unfortunately for the Fins, this is not a true home game (London), but they have been nothing if not ordinary at home anyway since Joe Philbin arrived. Miami is 13-12 straight up and 11-12-1 against the spread as a host since September of 2012. Maybe the comfy confines of Wembley Stadium will feel just as comfortable as Sun Life Stadium.

Jacksonville Jaguars at Indianapolis Colts (-9, Over/Under 48, 73% backing Colts ATS): The Colts avoided a disastrous 0-3 start to their season with a 35-33 win over the Titans last week, but the performance did little to mitigate the rapidly rising concerns in Indy. And the anxiety ratcheted up a little more this week when it was revealed Andrew Luck was dealing with an injury to his throwing shoulder. His status is probable for Sunday’s game, though, and Indy should continue to benefit from facing divisional opposition, even if Luck is somewhat limited.

Houston Texans at Atlanta Falcons (-6.5, Over/Under 47, 80% backing Falcons ATS): The Falcons offense looks unstoppable right now and the pitch and catch duo of Matt Ryan and Julio Jones should have its way with a Texans defense that had been somewhat shaky until last weekend’s 19-9 win over the Buccaneers. Tampa Bay posted just 318 total yards and converted one of its 12 third down opportunities against J.J. Watt and company. But Ryan is not Jameis Winston and Atlanta owns the most prolific offense Houston has faced this season (Kansas City and Carolina being the other two).

Carolina Panthers at Tampa Bay Buccaneers (-3, Over/Under 40, 87% backing Panthers ATS): Seldom do the Panthers look pretty, but they get the job done. Carolina is off to a 3-0 start and it should be 4-0 before heading to Seattle for an October 18 showdown with the Seahawks. Tampa Bay, meanwhile, looks like a group of pirates a long way from finding their booty. At least the Bucs have a home game with Jacksonville on the horizon.

New York Giants at Buffalo Bills (-5.5, Over/Under 46.5, 54% backing Giants ATS): The Giants offense has been good enough this season (when not shooting itself in the foot), averaging 26 points per game, but their defense is a sieve, yielding over 410 yards per game. That number may be deceptive, though, as New York’s 5.8 yards per pass allowed is considerably below the league average of 6.4. And the Giants are yielding just 3.4 yards per carry, which ranks as the fourth best average in the league. However, the Bills offense, which is rolling with Tyrod Taylor under center, will provide New York with another stiff test.

Philadelphia Eagles at Washington Redskins (+3, Over/Under 44.5, 81% backing Eagles ATS): The Eagles awoke from their slumber last week, defeating the previously unbeaten Jets 24-17 in New York, but they posted just 18 first downs and 231 total yards in the win. The victory was mostly a product of sloppy ball security on the Jets, who turned it over four times. Still, it has the public expecting a divisional road win from Philly this weekend. That is not completely unreasonable considering the Eagles have won 10 of their last 12 games in D.C. and they covered the number in eight of those games.

Kansas City Chiefs at Cincinnati Bengals (-4, Over/Under 44.5, 62% backing Bengals ATS): Cincinnati waved a big ‘Look At Us’ banner on Sunday, topping a desperate Ravens squad 28-24 and it did it their own backyard to boot. New England, Green Bay and Arizona are getting more attention right now, but that may not be the case after this week’s meeting with the Chiefs. While Kansas City laid an egg in Green Bay on Monday night, it is still a formidable opponent. And a Bengals win over Andy Reid’s squad would serve as another really nice feather in their cap.

Cleveland Browns at San Diego Chargers (-7.5, Over/Under 45, 62% backing Chargers ATS): It is difficult to tell what to make of the Chargers after their ugly 14-31 loss to the Vikings. It may not get any easier after this weekend’s meeting with the Browns. San Diego could be without three starting offensive linemen and few people put a lot of stock into a win over the Browns, which is the result everyone is expecting on Sunday. Cleveland, thus far, looks like the train wreck everyone thought it would. And its lone win, a 28-14 dusting of the Titans, saw the team produce just 274 yards while benefitting from three turnovers.

Green Bay Packers at San Francisco 49ers (+8.5, Over/Under 48.5, 84% backing Packers ATS): If someone labeled the Packers the best team in the NFL, few would argue. The reason: Aaron Rodgers is playing a ridiculous brand of football. Colin Kaepernick, not so much. Well, he is as well, just not the good kind. Kaepernick tossed four picks in last week’s loss to the Cardinals, which put his fingerprints all over the 47-7 debacle. Sunday’s score should be a little more respectable; quarterbacks seldom tend to toss so many picks in back-to-back weeks.

Minnesota Vikings at Denver Broncos (-6.5, Over/Under 43, 69% backing Broncos ATS): Peyton Manning is still the face of the Broncos and he’s proven there is still something left in the tank; however, the team’s 3-0 start is a product of its exceptional defense. Denver is allowing just 16.3 points and 259 yards per game and it returns to Mile High this weekend after two road outings. The Vikings are 2-1 on the season, but their 29th ranked offense (294 yards per game) will have trouble mustering much of attack against the Broncos.

St. Louis Rams at Arizona Cardinals (-7, Over/Under 42.5, 89% backing Cardinals ATS): While Seattle is the two-time defending NFC West champion, Arizona looks like the cream of the division’s crop right now. The Cardinals have blazed through a trio of teams that are a combined 1-8 on the season, though. While the Rams own a 1-2 record, they are the most formidable team Arizona has faced thus far. And don’t expect St. Louis to spot the Cardinals 14 points on Sunday.

Dallas Cowboys at New Orleans Saints (N/A): Drew Brees status is still up in the air, which is why a line has not yet been issued for this game. We do, however, know the status of Tony Romo and Dez Bryant. They aren’t playing. And last week that came back to bite the Pokes, who dropped their first game with a 28-39 loss to the visiting Falcons. Brandon Weeden and the offense acquitted themselves well enough, though, averaging 7.1 yards per play. Dallas should have similar success against a Saints defense that has allowed 397 yards and 28 points per game.

Detroit Lions at Seattle Seahawks (-9.5, Over/Under 43, 73% backing Seahawks ATS): Seattle got off the schnied last week, pasting the Bears 26-0 at CenturyLink Field. The Seahawks welcome another floundering NFC North squad to the Pacific Northwest this weekend and the odds makers are anticipating a similar result. The Lions would appear to have a little more bite than the Bears at this juncture, but they are 1-10 straight up and 1-9-1 against the spread playing as a +10 or less road dog coming off a home loss since the 2006 season.