Betfair has signed rugby legends Lawrence Dallaglio and Keith Wood to head their coverage of the 2015 Rugby World Cup.

Betfair is making sure they take full advantage of this year’s Rugby World Cup by hiring two of the game’s legends to spearhead their coverage of the event.

Former England captain, and World Cup winner, Lawrence Dallaglio, and former Ireland captain, Keith Wood, have been signed by the world’s largest Internet betting exchange to star in exclusive video content, and give their view on betting lines within the competition. 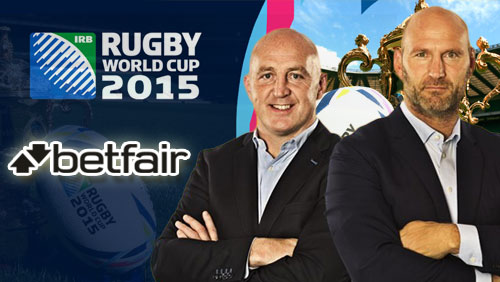 Dallaglio played for the London Wasps for the entirety of his career. He earned 85 England caps between 1995 and 2007, and captained the side until he was forced to resign his position in 1999, after the News of the World alleged he at one time used cocaine and ecstasy. He denied the allegations. Martin Johnson replaced him as captain. Dallaglio went on to be part of the 2003 World Cup winning side. He was the only player to play every single minute of that event.

Wood played his club rugby for Harlequins and Munster. He captained the Irish national side between 1996 & 2003. winning 58 caps in the process. Both Wood and Dallaglio played together for the British & Irish Lions.

“Having played in three World Cups I can say that this one certainly has the potential to be the best one yet and is easily the most competitive since it’s inauguration in 1987.” Wood told the associated press.

Twickenham will host the final on 31 Oct.

The tournament once again contains 20-teams. England beat Fiji 35-11 in the opening game, and it has already contained the biggest shock in the history of the competition, as rugby minnows Japan beat the former World Champions, South Africa 34-32, in one of the opening group games.

Only four nations have ever won the World Cup: New Zealand (twice), Australia (twice), South Africa (twice) and England. Betfair currently has holders New Zealand as the 11/10 favorites. England is 4/1, Australia is 7/1 and if you fancy an outside bet: Romania, Uruguay and Namibia are 5,000/1.