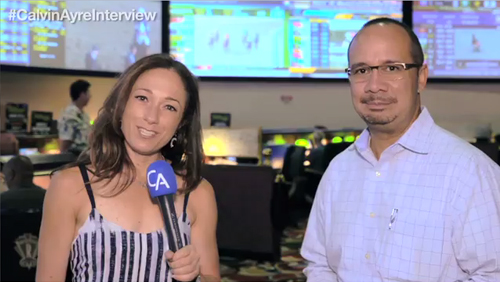 Americans love to bet on sports and the complex legal situation surrounding the activity is a mystery to most.  For those who want to indulge in sports betting with the blessing of the US government, getting on a plane to Las Vegas is one of the only answers.

Jay Kornegay is a veteran in the world of legal sports betting in Nevada.  He’s currently the VP of Race & Sports Operations at the Westgate Las Vegas Resort and Casino, home to the largest sportsbook in town.  Since 1988, the Westgate SuperBook has hosted the annual SuperContest, an event that has grown into the WSOP for NFL football handicappers.

Becky Liggero: Thank you for joining me today, Jay.  Can you elaborate on the growth you’ve seen since the SuperContest’s launch in 1988 to right now in 2015?

Jay Kornegay: Back in the early stages of the SuperContest we were only getting about 200 to 300 entries and that was pretty consistent for the first two decades of this SuperContest.  With the information highway and social media, it really has spread the word out to the entire country and this country loves betting on sports. It loves betting on football and when all these people out there found out they can enter a Las Vegas prestigious contest like the SuperContest where its against the NFL spread, they are very interested in it.  So that’s the main reason for the growth over the last few years.

BL: Excellent, we know how much Americans love betting and now we’re actually starting to see the leagues warm up towards the legalization of sports betting- for whatever reason that is- beyond Las Vegas.  What do you think the chances are of having the widespread legality of sports betting across the United States?

JK: I think its still a long shot.

I think its going to take some time because of the resistance of some of those leagues.  Some of the other leagues have warmed up to sports betting, know its happening outside of Nevada and not just in the state of Nevada, because the commission that was established years ago said that 98.5% of everything that’s bet on sports in this country happens outside Nevada.  And I think some of the commissioners have recognized that and they understand that its actually taking place, so they are welcome to regulating it, acknowledging it and make sure that we police it the right way because its happening no matter what.

We’re here to protect the integrity of the game as well as the leagues.

BL: The leagues are also now getting partnered up with some of the Daily Fantasy Sports sites which is interesting – there’s an explosion here in the US- how has this growth of DFS impacted your business here in Las Vegas?

JK: Its very interesting, but most of the gamblers out here are not huge fantasy players, they prefer to actually bet on the game than the players themselves.

It just shows you how popular betting on sports is.  These leagues are just doing tremendous business and its not surprising to us.

BL: Fantastic.  Well Jay we wish you the best of luck with the contest this year and much growth in the future.  Thank you so much for joining me today.