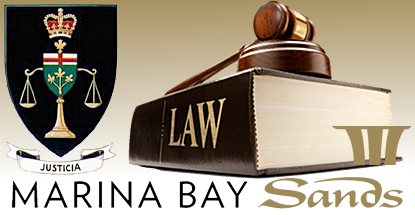 In February 2013, a gambler named Jian Tu aka Tu Jian ran up a credit marker of S$9.94m at MBS, which is owned and operated by Las Vegas Sands. One year later, MBS filed a statement of claim over Tu’s unwillingness to honor this marker, and MBS received a default judgment against Tu in June 2014.

MBS, which has not been shy about pursuing its regretful VIPs, eventually tracked Tu down to Markham, a town just outside Toronto, where he enjoyed permanent resident status. MBS filed a claim in Canada to seize Tu’s local assets and made multiple attempts to serve the judgment on Tu via regular and registered mail and courier between July 2014 and January 2015.

Apparently realizing he was cornered, Tu filed a motion to dismiss the Canadian proceedings, based on his claim that the credit agreement with MBS stipulated that any dispute had to be handled by a Singapore court. Tu’s wife submitted a claim that her husband had never received any of MBS’ attempts to serve him with the judgment at his Canadian residence because he’d been traveling.

Earlier this month, Ontario Superior Court Justice Sean Dunphy bitch-slapped Tu’s attempts to skirt responsibility, saying the court was “not a sandbox playground where do-overs can be expected on demand.” Dunphy rejected Tu’s “bald, second-hand assertion” of being blissfully unaware that MBS was pursuing claims against his Canadian property.

Dunphy went on to say that he’d made a “fairly obvious inference” that Tu has “no serious defense on the merits” of the judgment and could see no justification “other than delay” for Tu’s efforts to transfer the matter back to Singapore’s courts.

Meanwhile, MBS’ crosstown rival Resorts World Sentosa caught some casino cheats over the weekend. On Sunday, officers of the Criminal Investigation Department’s Casino Crime Investigation Branch arrested four Turkish nationals suspected of colluding their play at an RWS gaming table. If convicted, the three men and one woman face fines of up to S$150k and prison stints of up to seven years.