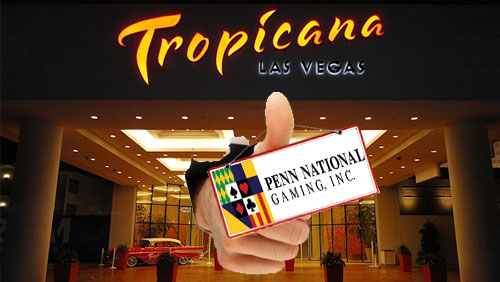 The Nevada Gaming Commission (NGC) approved the $360m sale of the Tropicana Las Vegas to casino and racetrack operator Penn National Gaming (PNG) on Thursday and the deal is expected to be finalized on Tuesday.

“The addition of Tropicana Las Vegas to our national portfolio of gaming assets is an exciting and important milestone for Penn National as it fulfills our longstanding strategic objective to acquire the right resort at the right price on the Las Vegas Strip,” said PNG CEO Timothy Wilmott. “Tropicana Las Vegas will allow us to leverage our database of nearly 3 million active regional gaming customers while further diversifying our operations with another wholly-owned asset.”

PNG will not be rebranding the Tropicana as one of PNG’s Hollywood-themed properties to avoid any confusion with Caesars Entertainment‘s Planet Hollywood Hotel-Casino on the strip.

PNG is also expected to invest approximately $20m in further facility improvements and integration of the company’s player database over the next 6-9 months.

Bob Sheldon, recently named as president of PNG’s Las Vegas properties, will have direct oversight of all aspects of the operations of both Tropicana Las Vegas as well as the M Resort Spa Casino, which is located about 10 miles from the strip and attracts about 25% of the company’s customers who regularly visit Las Vegas.

“Our regional gaming customers have long asked us to offer them an attractive destination on the Las Vegas Strip. After our disciplined search, we believe the iconic Tropicana Las Vegas will successfully address customer demand for a Strip property while enhancing our already strong competitive position in the local markets where we operate,” said Wilmott. “Furthermore, the Tropicana Las Vegas is ideally suited to benefit from significant investment at adjacent gaming properties which is expected to generate additional traffic in the area.”