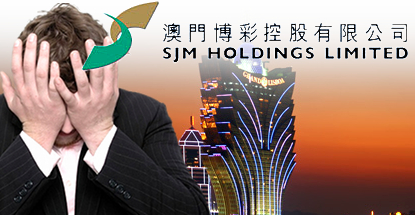 Macau casino operator SJM Holdings’ profit tumbled more than half in the first half of 2015.

All but HKD 298m of the revenue total came from gaming activity at the 18 SJM-licensed venues in Macau. The Gaming Inspection and Coordination Bureau reported that SJM’s share of Macau’s overall gaming revenue fell 1.2 points to 22.3%.

SJM’s flagship Casino Grand Lisboa bore the brunt of the downturn, with revenue falling 43.5% to HKD 9.2b. The property welcomed 5.3m visitors in H1, down from 6.9m in the same period last year. The Grand Lisboa Hotel generated the bulk (HKD 275m) of SJM’s non-gaming revenue, but occupancy fell 14.2 points to 80.1%.

SJM CEO Ambrose So said his firm remained optimistic about Macau’s future despite the market’s “challenging conditions” in H1. So said construction of the new Lisboa Palace integrated resort on Cotai is making “good progress” and remains on track to open in 2017.

Prior to the results announcement, SJM executive director Angela Leong On Kei said the company had no plans to implement any cost-cutting measures to mitigate the effects of Macau’s 14-month long downturn. However, Leong acknowledged that SJM was “continuously developing our business, and when you say whether there are any aspects that require cost-cutting, it depends on visitor traffic.”