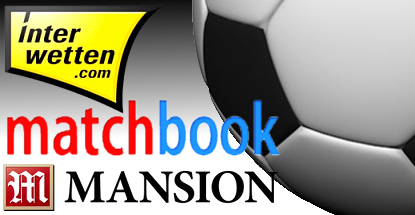 Last week, the Gibraltar-based Mansion announced that it had signed on as official main club sponsor of Crystal Palace FC. Mansion says its logo will adorn the club’s kit, which suggests that the two-year shirt deal the team inked with online payments group Optimal Payments last year came to a premature conclusion.

Mansion CEO Sagi Lahav said his firm looked forward to working with Crystal Palace on “a number of initiatives that will enhance the visibility of both our brands, whilst providing a platform for CPFC fans, and our Mansion casino members, to benefit from the partnership.” The deal follows Mansion’s recent shirt deal with AFC Bournemouth, which only recently won promotion to the EPL.

A little lower down the football pecking order, online exchange betting specialists Matchbook.com have inked a new sponsorship deal with Football League Championship squad Brentford FC. The deal is for one year with an option for a second year, and will see Matchbook’s logo adorn the front of club’s kit, a promotion from the 2014-15 season, when Matchbook’s logo appeared on the back of the shirt.

Over on the continent, Malta-based online gambling operator Interwetten recently inked a shirt deal with SV Grödig, which finished eighth in the Austrian Bundesliga last year. The one-year deal, which Sponsors.de said was worth a “low-six-figure” sum, will see the Interwetten logo appear on the club’s jerseys.

The deal reportedly landed in Interwetten’s lap following a somewhat circuitous journey. The club held a raffle for the shirt sponsorship at the conclusion of last year’s season, but the raffle winner – a local bakery named Klappacher – decided it had no need for national exposure and thus chose to sell the rights. For six figures, one can only hope they threw in some strudel as a sweetener.