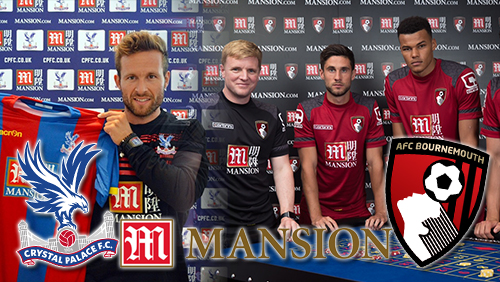 Global online gaming business, Mansion Group will be the Main Sponsors of Crystal Palace F.C. and AFC Bournemouth this season.

Both partnerships were negotiated by sports marketing agency SportQuake, who specialise in creating and delivering world-leading two-way partnerships for rights-owners and brands.

Premier League debutants AFC Bournemouth have also secured a club record sponsorship fee. The Cherries will showcase their new kit in the USA next Wednesday [15 July] in a friendly match against MLS side Philadelphia Union.

SportQuake Founder & CEO Matt House said: “With over 30 gaming brands active in the Premier League, we wanted to do something different to create some impact and announce Mansion’s return to football.”

Sagi Lahav, CEO of Mansion Group, said: “As a global business with the utmost respect for the English Premier league, we are thrilled to be supporting two clubs next season and look forward to working together with both AFC Bournemouth and Crystal Palace.”

Since 2006, SportQuake has created more than 120 partnerships, generating over £160m in revenue for rights-owners.
Mansion Group’s history of football sponsorship includes being Shirt Sponsor of Tottenham Hotspur between 2006 and 2010 and Manchester City’s International Betting Partner for two seasons from 2011-12.
Other brands who have held shirt sponsorships with two Premier League teams in the same season include FX Pro (Fulham and Aston Villa in 2010-11), NTL (Newcastle United and Aston Villa 2000-02) and Sanderson (Sheffield Wednesday and Southampton 1995-99).